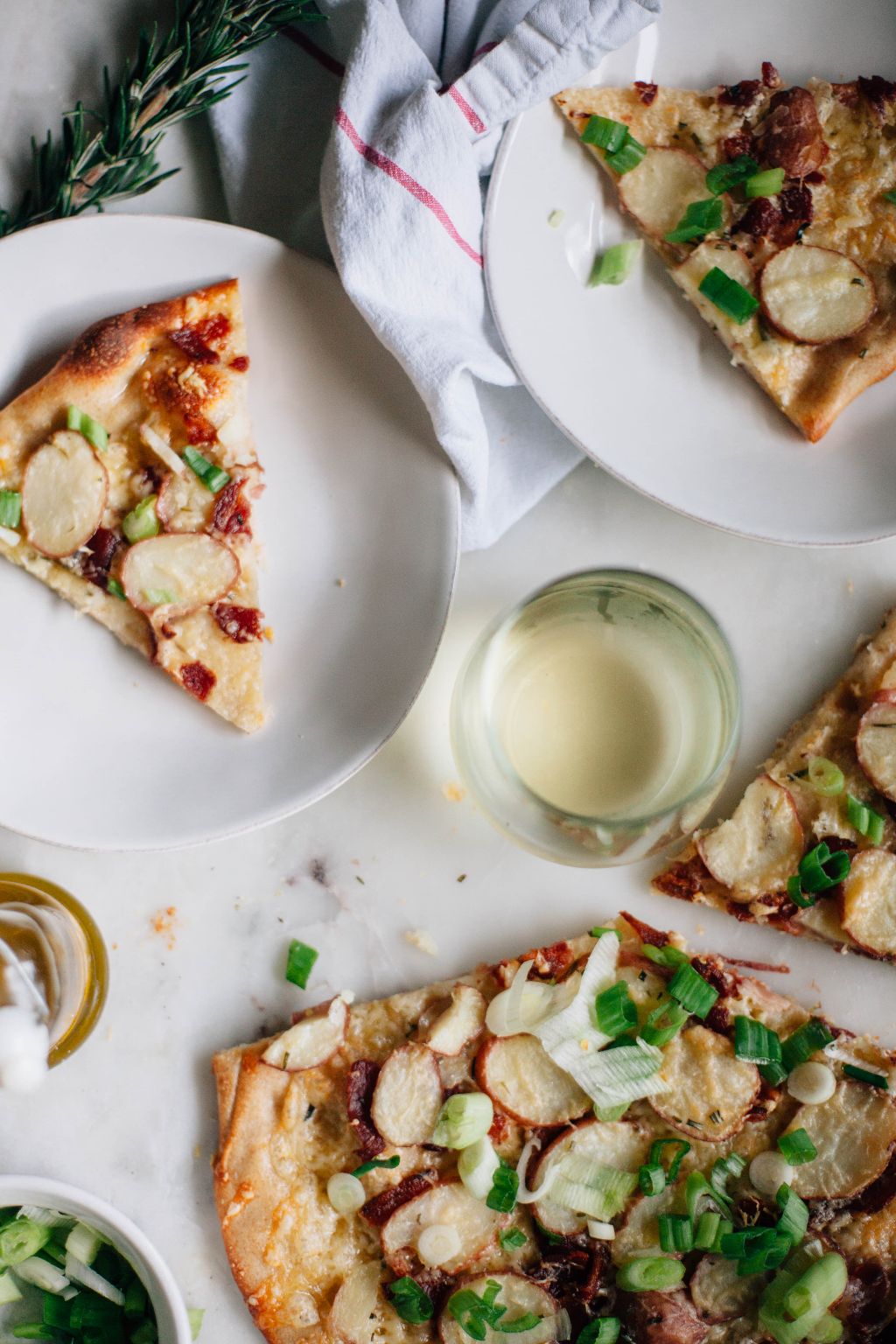 A friend of mine told me that she once got a job for saying that her favorite food was a baked potato. Baked potatoes are so good, RIGHT? They’re one of the most underrated foods. She’s not the first person to laud the baked potato. Ruth Reichl, my favorite NYT food critic mentioned in an interview that we don’t pay enough attention to the baked potato. She’s not wrong. As a kid, my dad would take us to Outback Steakhouse, and I’d always order a steak and a baked potato–the salt was flaky and crunchy on the outside, and I would eat the entire thing, skin included, dipped in A1.

So in a celebration of the underdog baked potato, I made a potato skin pizza with thin slices of red potatoes and chives and of course, bacon and cheddar cheese. When you take a bite, all is right in the world. Plus, I made a sourdough crust with a little tang to keep things interesting. You can use whatever pizza crust you like, but if you have a starter, try my recipe! It’s a chewy-crispy crust that holds up really well. Here’s how you make it. 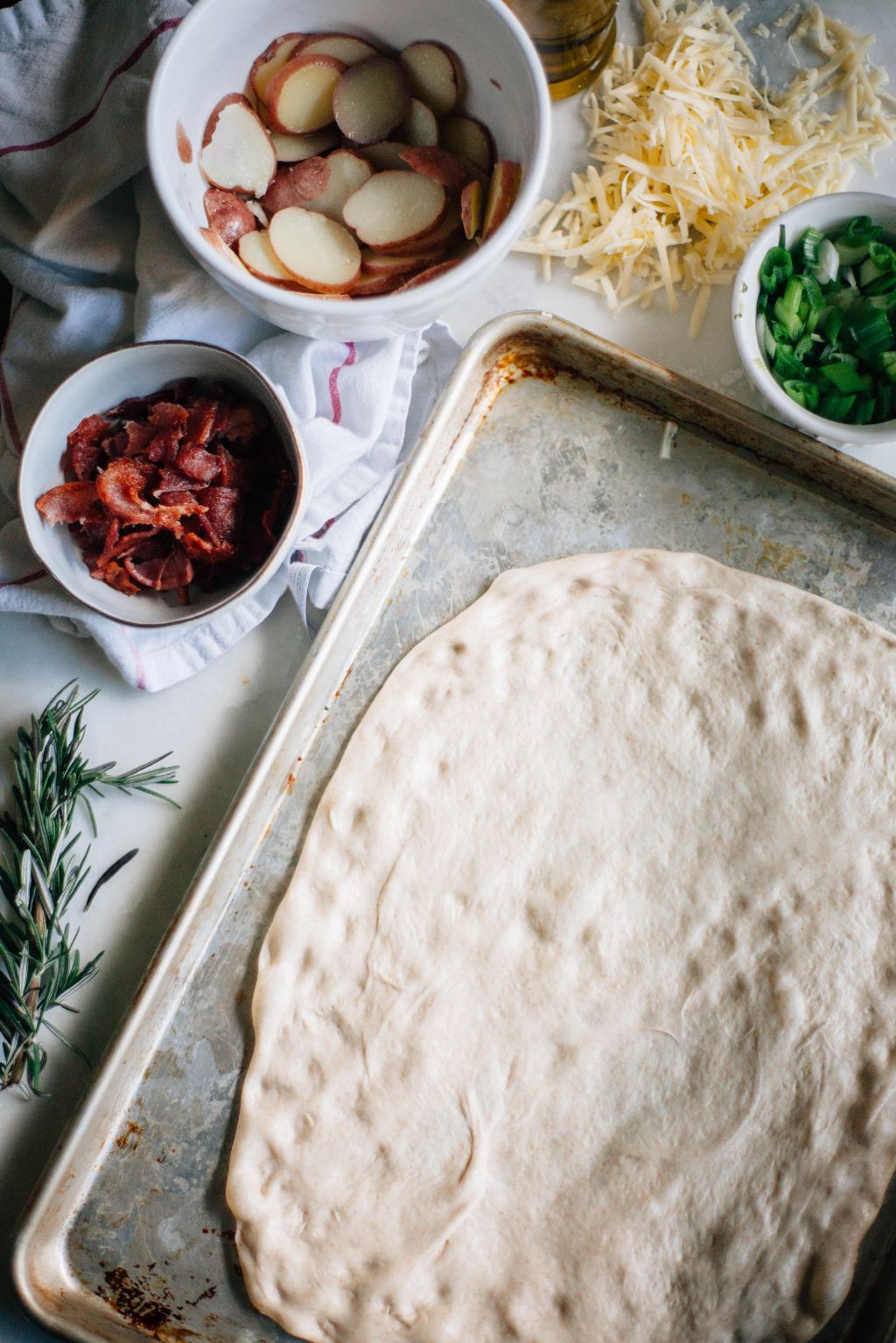 After making your crust, spread it out on an oiled baking sheet with your fingertips, careful not to tear it. Then let it sit while you preheat the oven to 450 and prep your toppings.

Cook 6 slices of bacon on each side until crispy. Then put them on a paper towel lined plate to drain. Once cool, crumble them up with your hands.

Bring a 4 quart pot half full of water to boil. Thinly slice your potatoes into 1 mm slices (so very very thin). Then dump them into the boiling water until fork tender, about 3-4 minutes. Drain them and place them in a bowl. Give them a little drizzle of olive oil, chop your rosemary and put it in there with a pinch of salt and mix together.

Start your pizza by drizzling with oil. Then Sprinkle with the cheddar. Add your bacon crumbles. Then place your potato slices on top, careful not to overlap. Sprinkle with parmesan and bake for about 15-18 minutes or until brown and bubbly. Then sprinkle your cooked pizza with green onions. 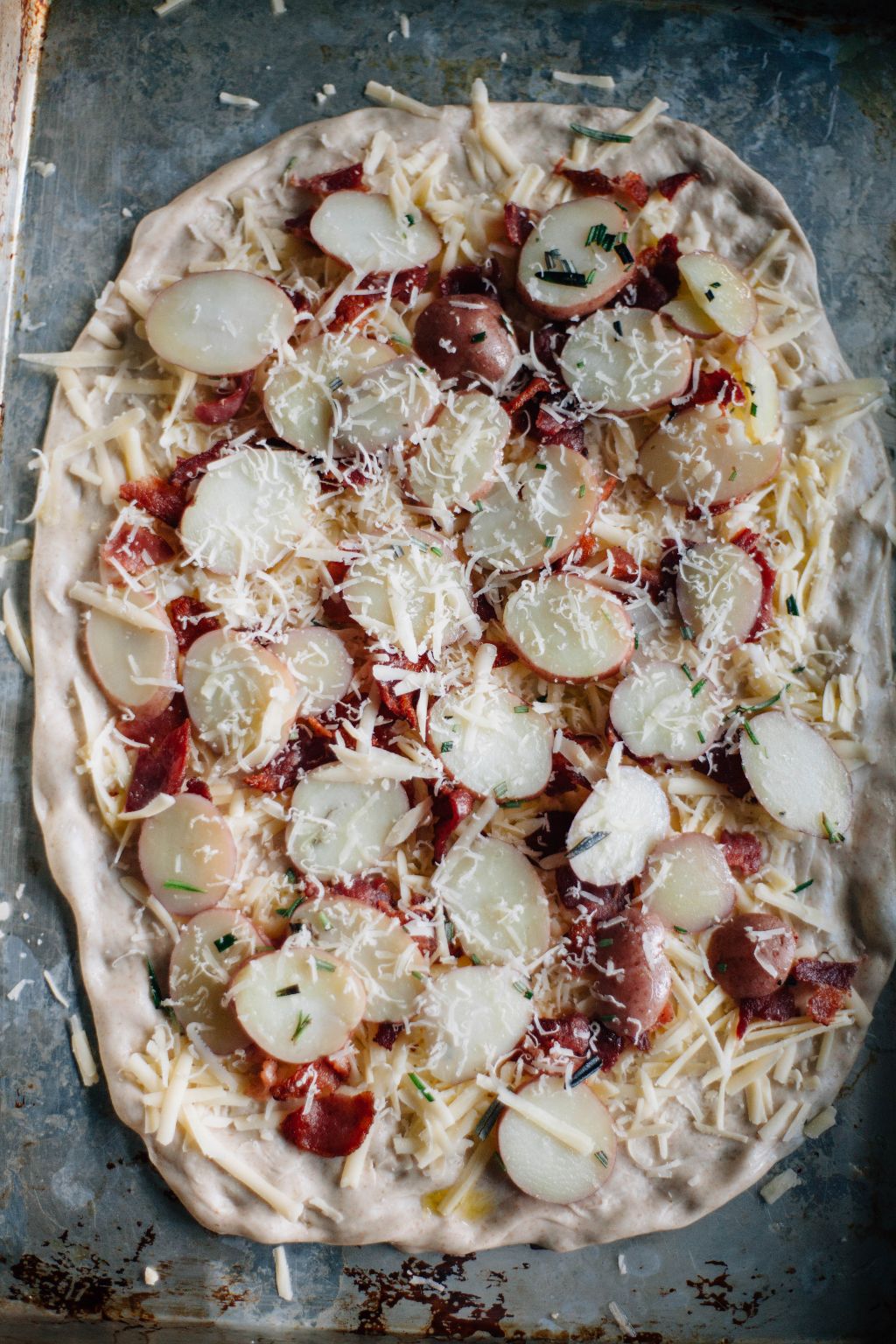 Look at how crazy good this looks! And it tastes so good–almost as good as a baked potato. 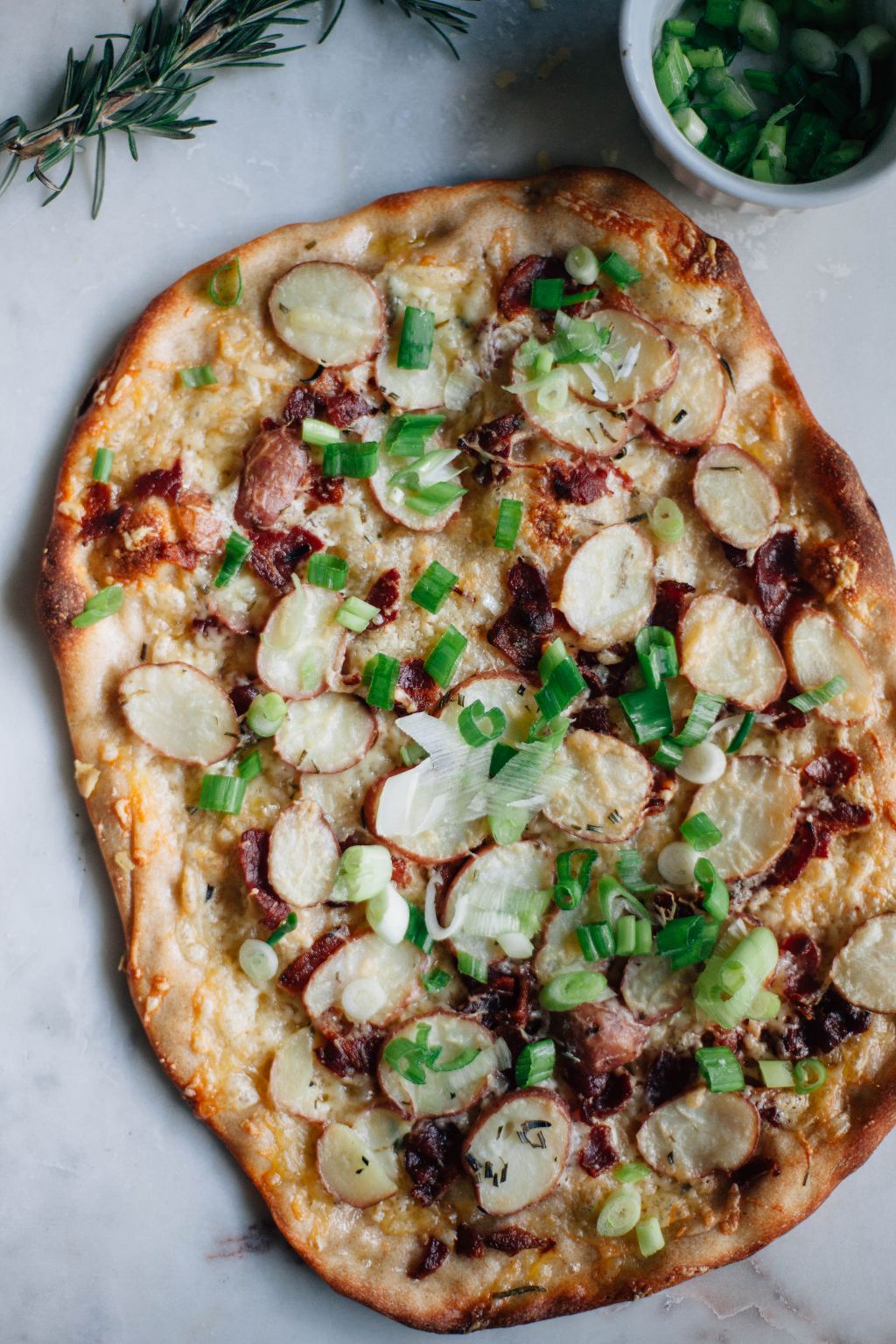 The dough is a little bit involved, but if you’re a big baker, try your hand at it! Sourdough pizza crust has a great tangy flavor I just love. 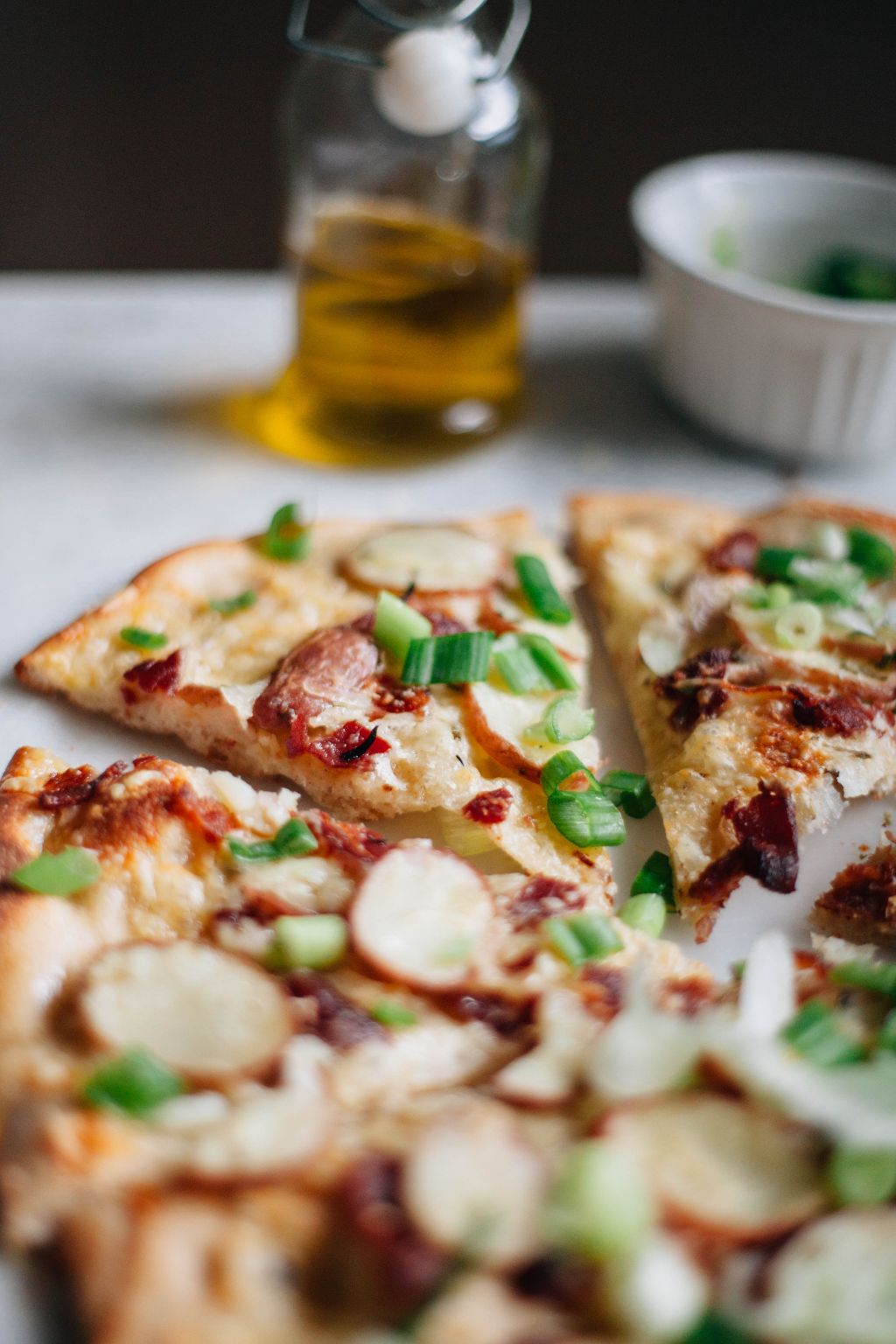 Does anyone else love potatoes like me? See the full recipe below. 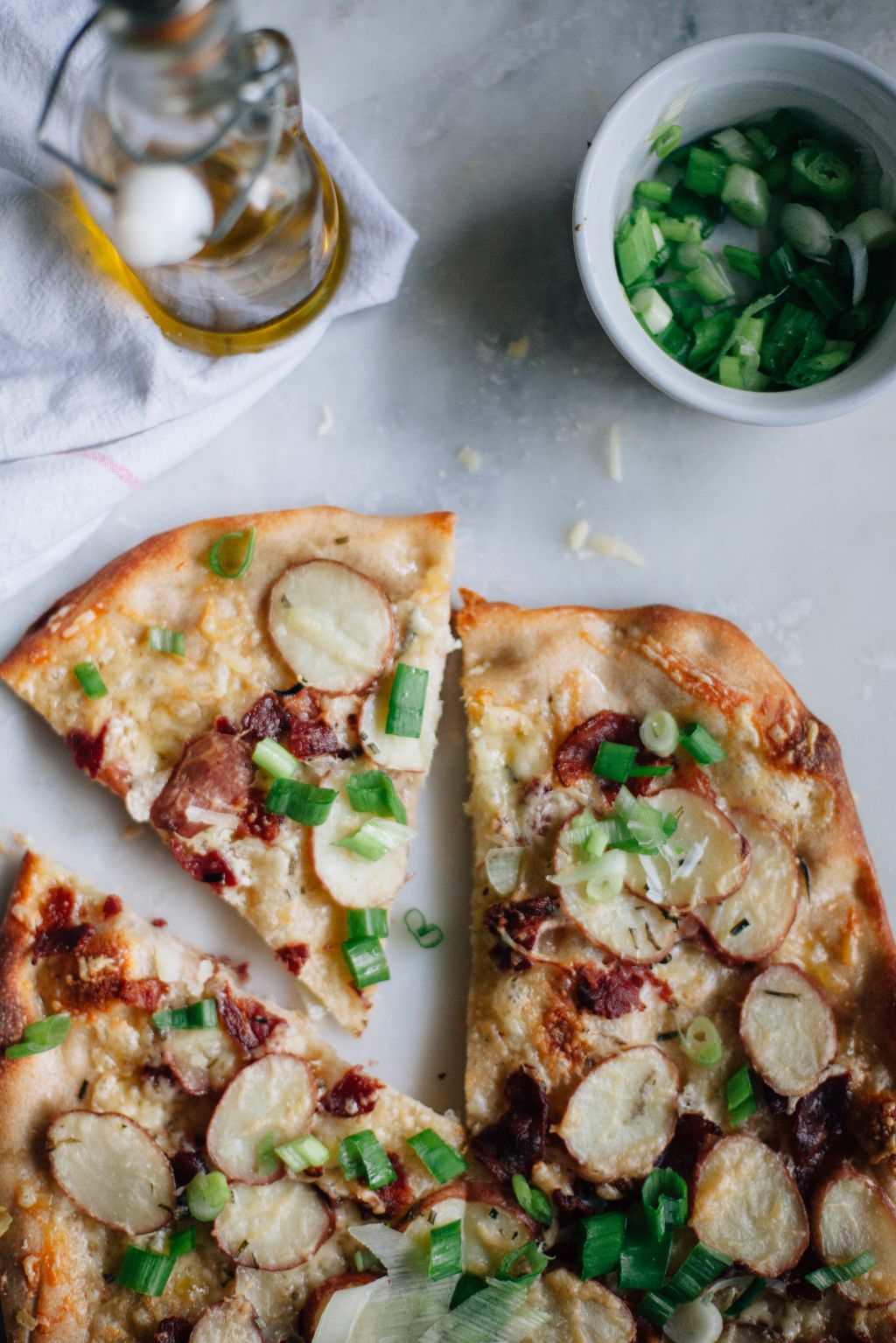 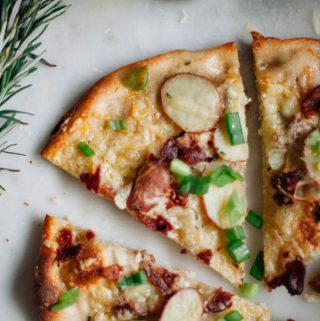