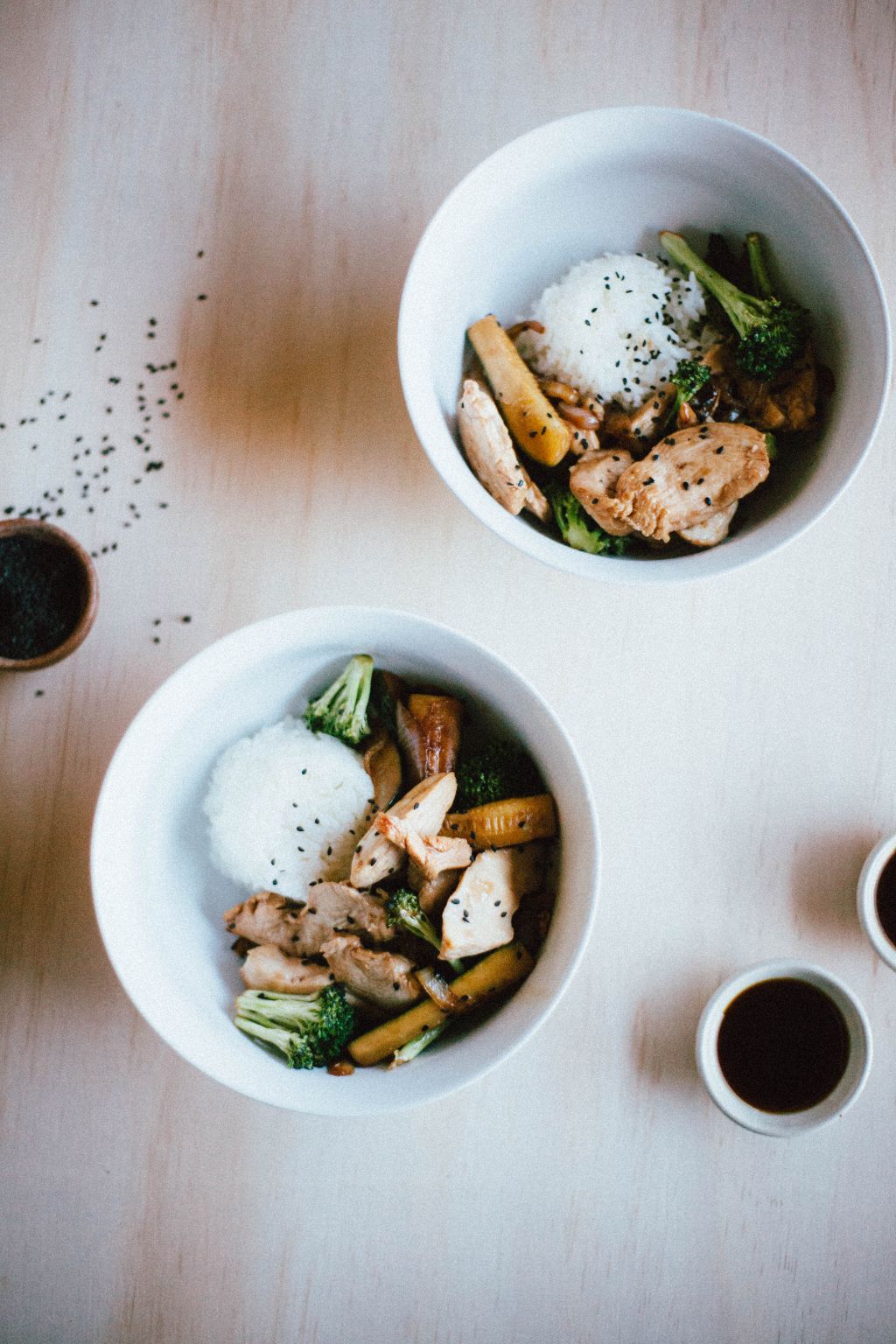 There was nothing more exciting to me as a child than a big plate of fried rice and Teriyaki Chicken from the Hibachi Grill at our local Japanese haunt. What is so delicious about that meal that stuck with me? And how is it that I would somehow eat a whole plate of vegetables only if they were covered in teriyaki sauce? My parents should have caught on earlier. Was it just the MSG or the toasty rice in sesame oil? That’s going to have to be the title of my memoir. Was It Just the MSG?

But the best thing I’ve discovered in adulthood about Teriyaki Chicken is that you can make the whole dish, vegetables and all, for just ten bucks. Not too shabby! This cheap dinner is comforting to me, and it’s a delicious alternative to takeout. My husband still doesn’t understand the concept of takeout. He always says that if we’re there, why don’t we just eat there. And the answer is because I want to wear my pajamas while I watch Poldark on TV and eat my rice.

Here’s our grocery list for this Ten Dollar Meal:

Let’s make this recipe! Here’s how you do it. Start by prepping your veggies. I like to slice the zucchini into long sticks. Then I slice the onions thinly and cut the broccoli into florets about an inch around. You could also throw in some mushrooms or last time I made this, I put a cubed boiled potato in there. Sounds weird, but it tastes good. Maybe carrots are your thing! I’m sure any of those would be amazing. 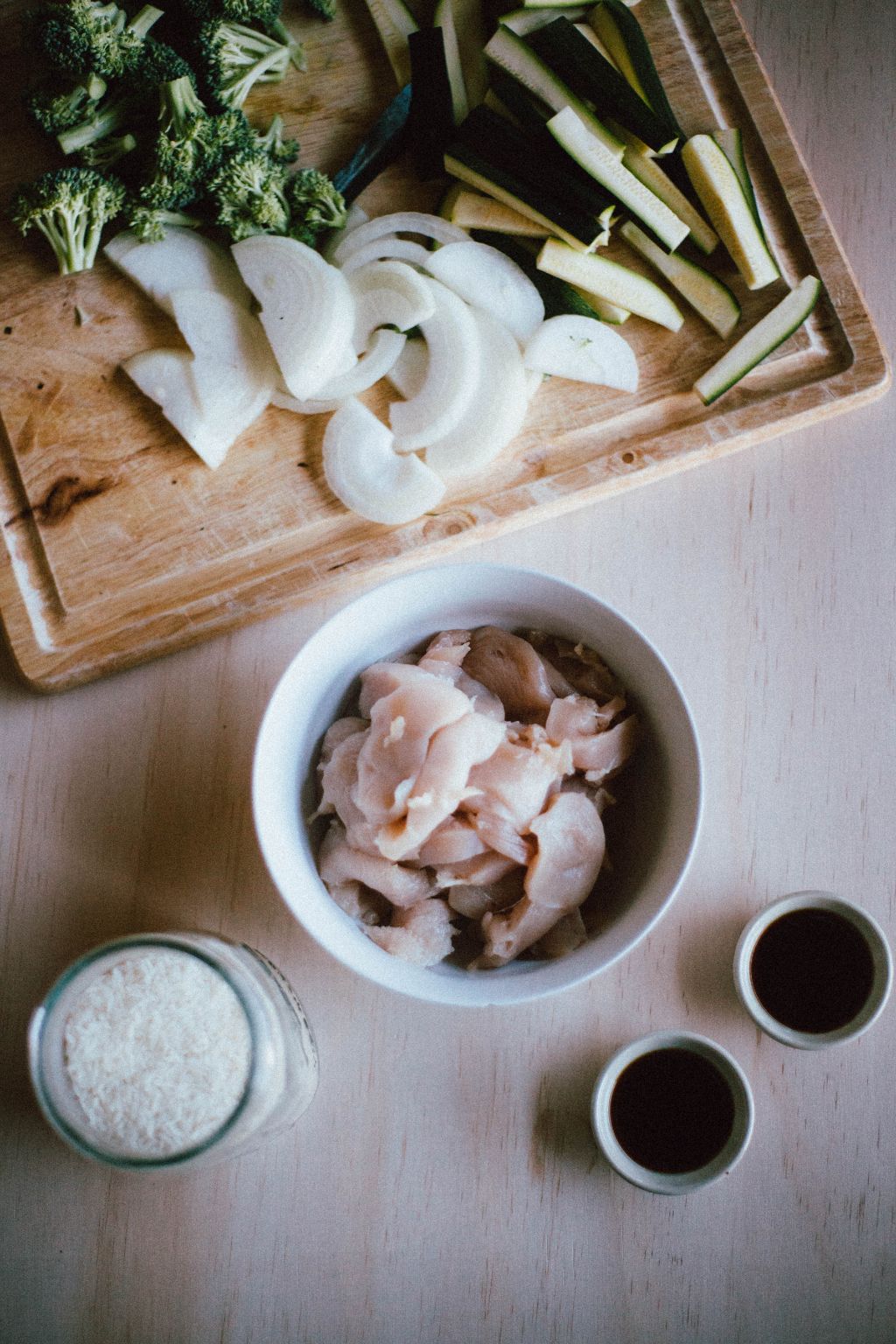 I slice the chicken into thin crosswise slices and marinate them in 2 tablespoons of teriyaki sauce and 1 tbsp of soy sauce. Get a wide and deep skillet and put it over high heat with a tablespooon of sesame oil. Add the chicken and juices to the hot pan and spread it out in a thin layer so it cooks evenly. Then after about three minutes turn them over and brown the other sides until all the chicken is cooked through and no pink remains. You can remove the chicken along with the remaining pan juices to a plate for later. 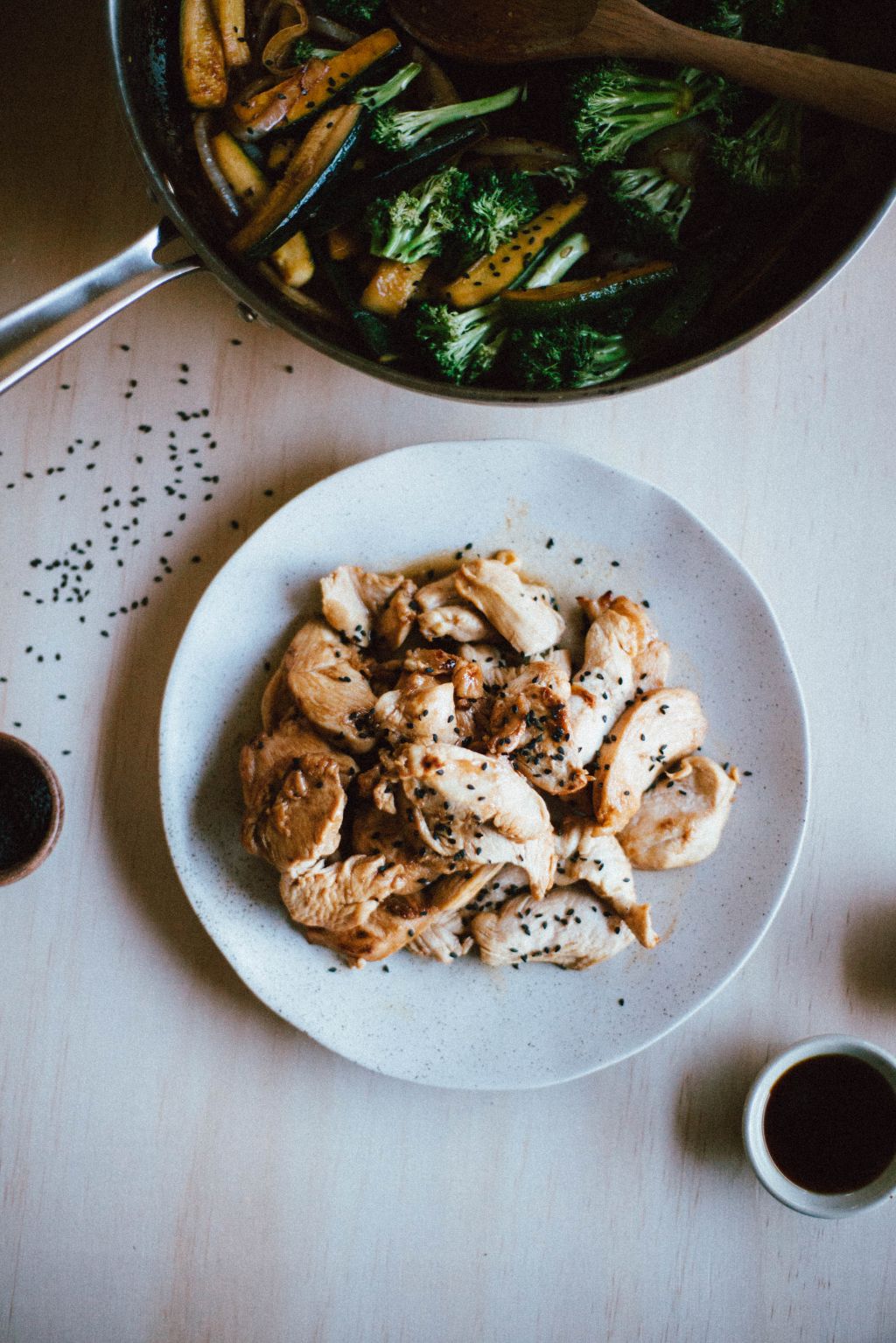 Use the same pan to cook your veggies. First, mix together the remaining three tablespoons of teriyaki and brown sugar. In the pan, add another tablespoon of sesame oil and then add the onions, stirring until the onions begin to soften and become translucent. Add the zucchini and the teriyaki mixture. Cook while stirring until the zucchini starts to brown and soften. Add the broccoli and soy sauce and stir while you cook until the broccoli is bright green but slightly soft. 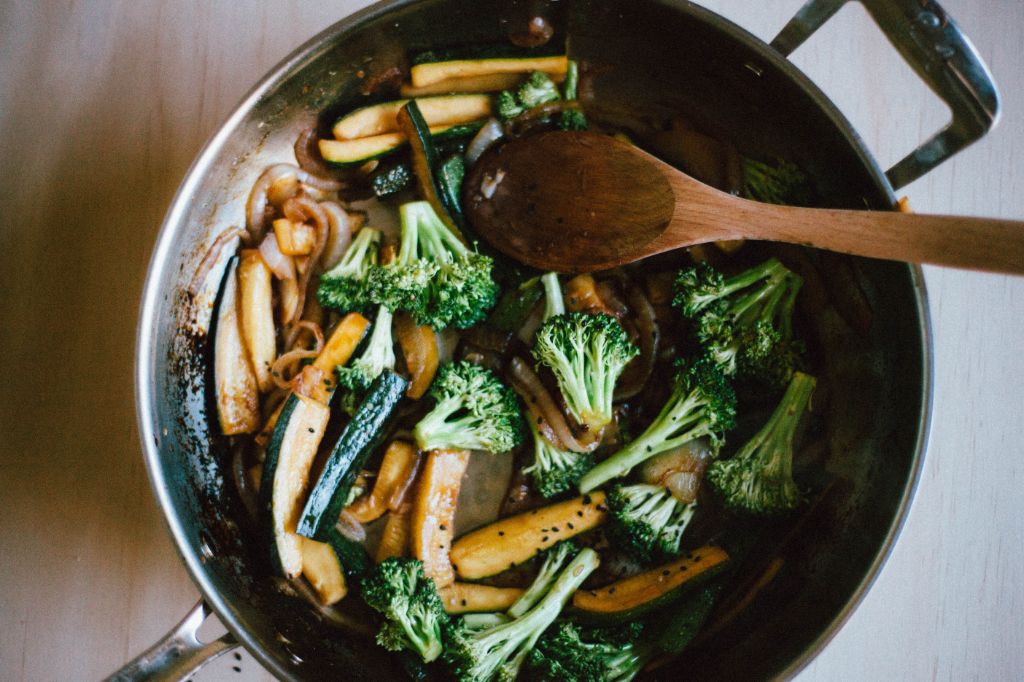 Add the teriyaki chicken back to your pan and give the pan a stir. 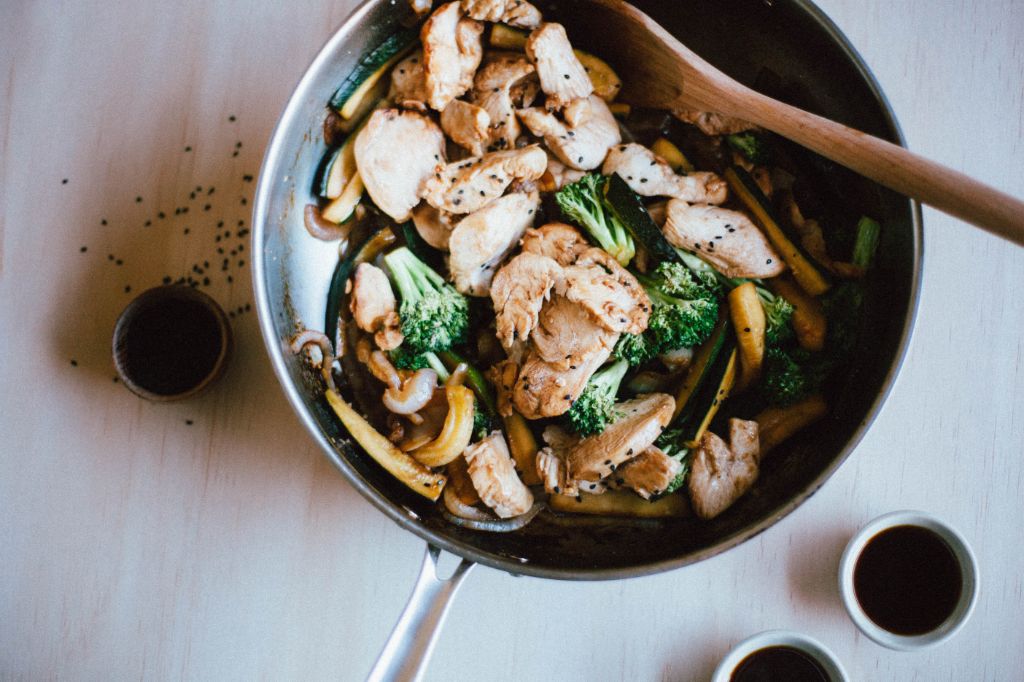 Serve with white rice and sprinkle with sesames seeds. See the full recipe below! 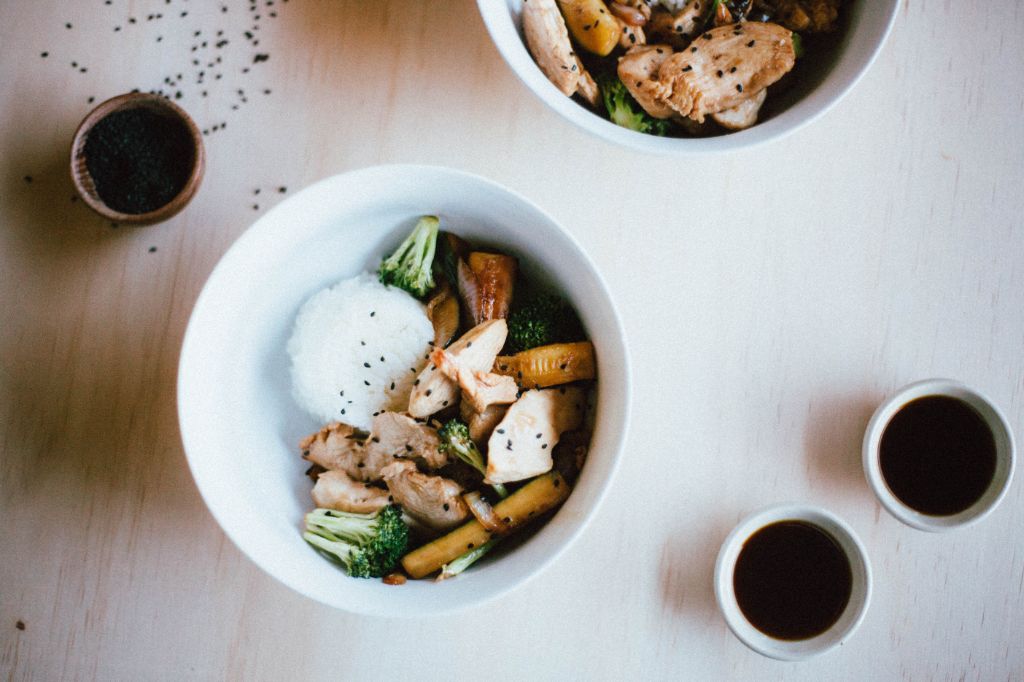