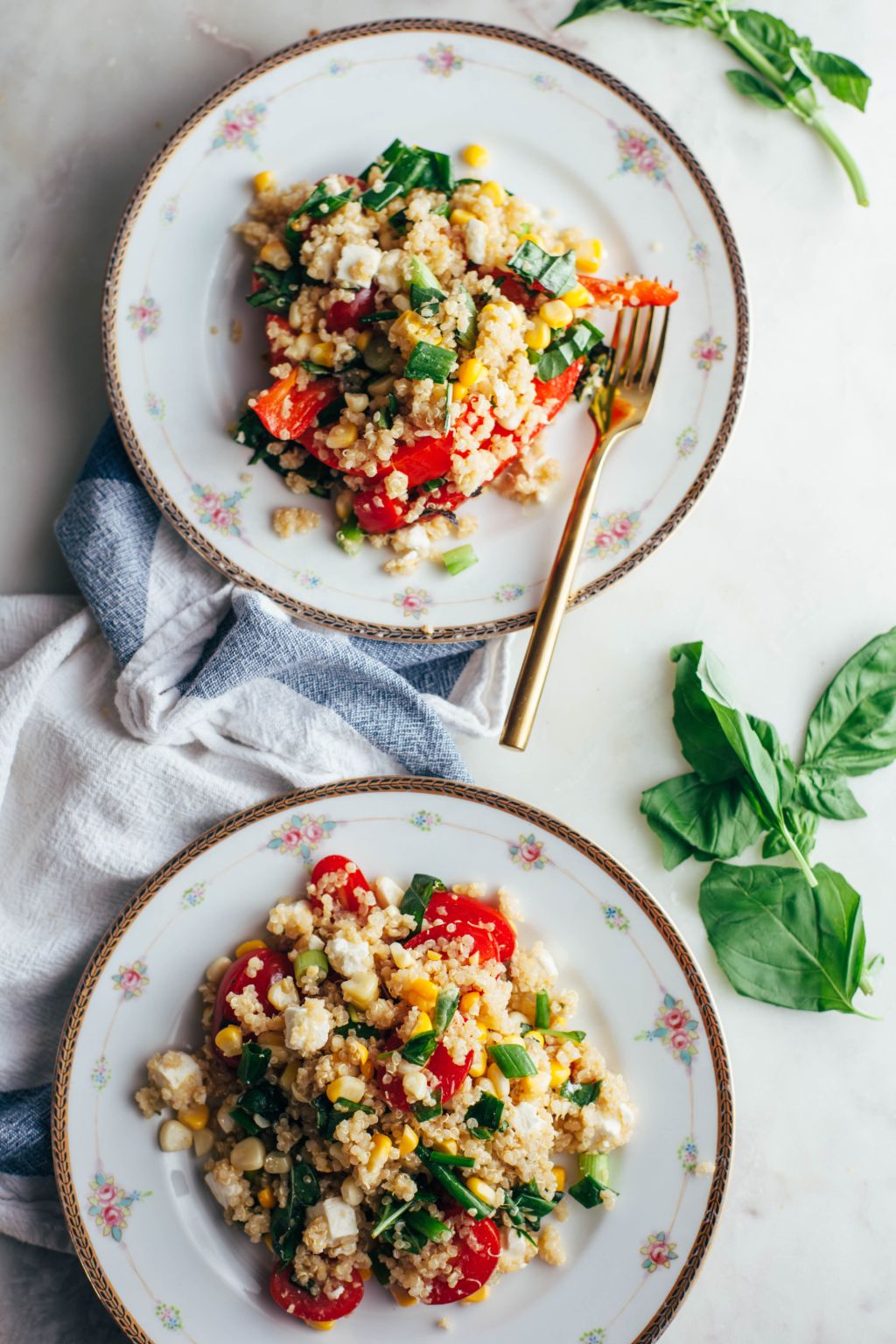 This recipe is one that I threw together in a last minute run to the grocery in which my husband was in tow and timing me. But as someone who loves a good challenge, I scoured the grocery for the best seasonal produce and was finished shopping in five minutes flat. I used to make a very similar recipe by Half Baked Harvest a loooong time ago, but this is my last minute grocery shop version of it. I hate grocery shopping, so I’ve lately been trying to zen myself out when I go. I’ve tried listening to Michelle Obama’s audiobook, which by the way worked, and I didn’t once try to run someone down with a cart when they blocked the aisle. Not that I would ever.

I love the simplicity of using barely cooked summer produce to throw together into a pretty and delicious quinoa salad. If you’re feeling adventurous, throw in some feta! Maybe some black beans would taste delicious. Or if you have some avocado. Really this is an anything goes Summer Quinoa Salad.

This recipe premiered on my very first cooking show! I’m so proud of it, and I am hoping I can conjure up that kind of energy to do one every week. We’ll see! It’s an excuse to really learn editing software and to dig in to video. I have a ton of new ideas.

Without further ado, here’s how you make this Summer Quinoa Salad.

Start by cooking your quinoa. I used chicken broth to add flavor, but you can use any kind of broth or water! Just bring to a boil and simmer with the lid on for 15 minutes until tender. Add the cooked quinoa to your salad bowl. Simply wrap the shucked ears of corn, slightly drizzled in olive oil, in a piece of an aluminum foil and bake for 20 minutes at 400 degrees. Then char your peppers by broiling them on the top rack until just barely charred. Slice the peppers and throw into your salad. 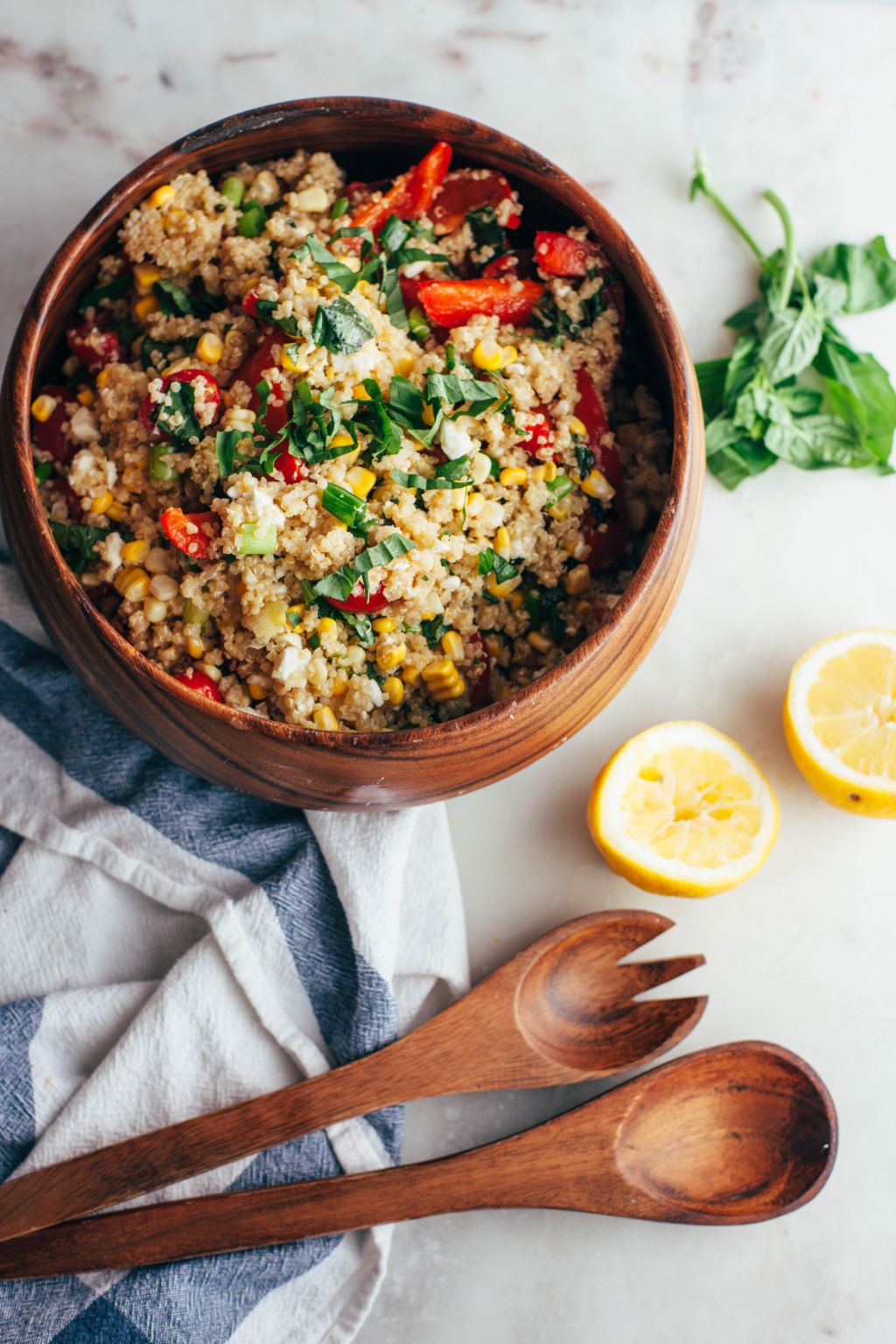 To cut your corn off the cob without a mess, halve the cob first and then cut the corn off. Add this to the bowl with the peppers and quinoa. Add in your halved tomatoes and green onions. Then roughly chop the basil and add this to your salad. To make your dressing, whisk together a quarter cup of olive oil with 2 tablespoons of red wine vinegar and 1 tablespoon of dijon mustard. Then squeeze in the juice of half a lemon and whisk. Pour this over the salad and toss. Taste to see if it needs salt. If you’re adding feta, throw it in and give it another toss before serving. Serve immediately or refrigerate and serve cold. See the full recipe below. 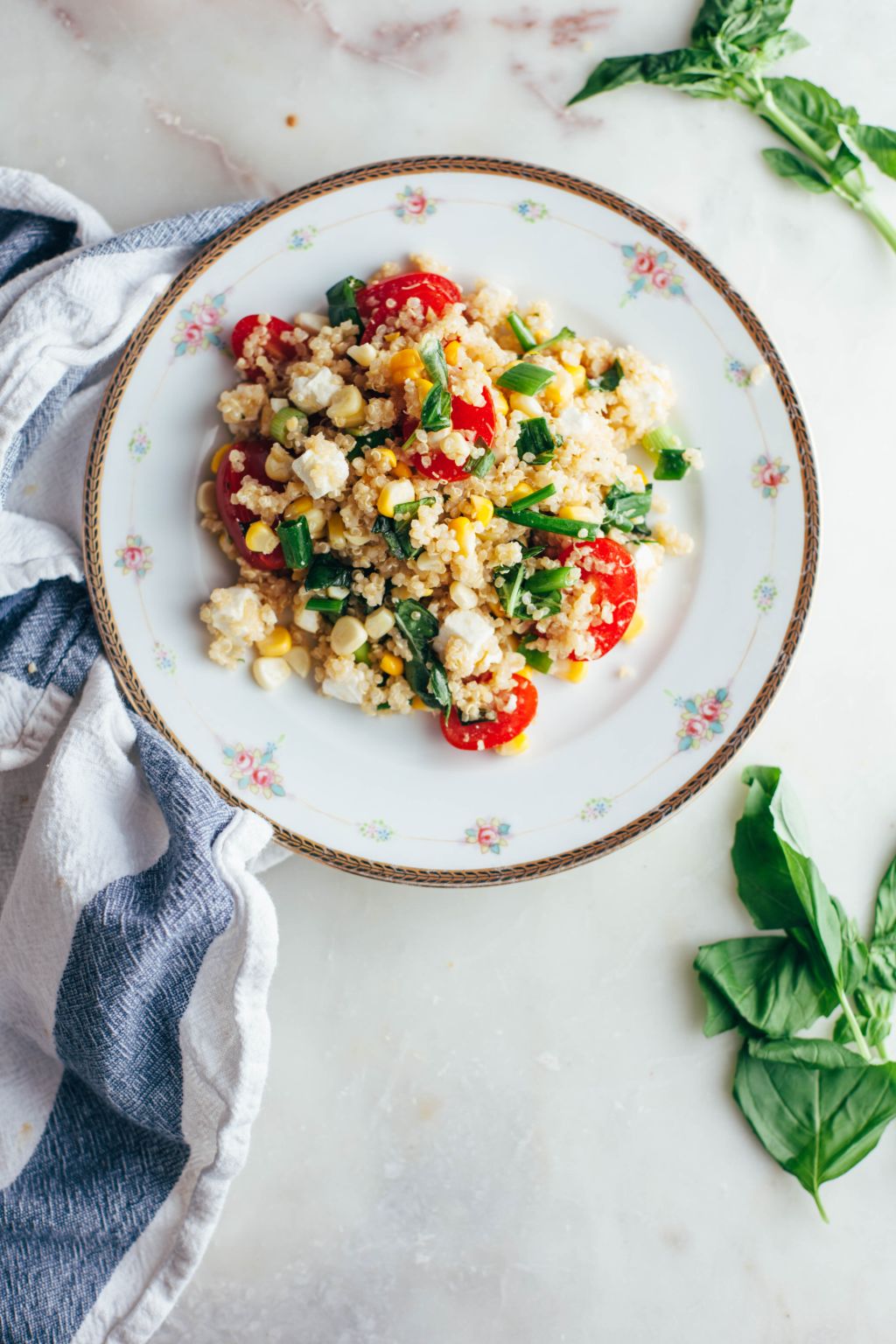