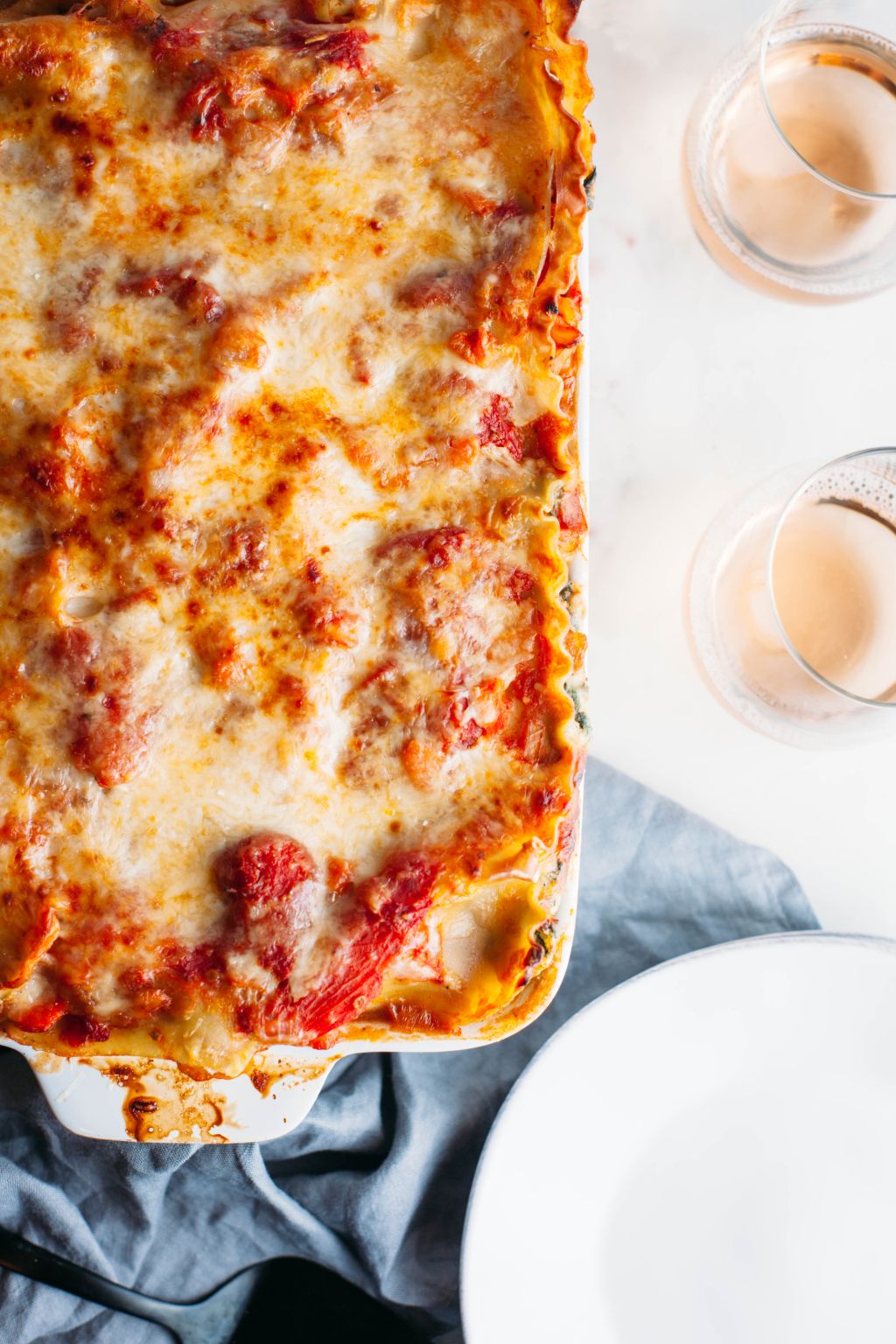 In my world, food is king. I am controlled by it. Sometimes, a craving for Spicy Noodles hits me at midnight, and I have no choice but to obey it. I have been known to put on a pair of jeans and run out the door late at night because I had just thought of dark chocolate, and I can’t live another minute without it. The truth is, there are some foods I can and will say no to, but I have never turned down pizza or pasta when offered to me. Exercise to me is only a way to justify all my untimely cravings, and to let my creative side eat its heart out.

This week, I can’t stop thinking about veggie lasagna. It’s one of the few noodles I prefer overcooked to al dente, and I’m pretty sure it’s only because that’s the lasagna of my childhood. You know the foods that you will never prefer the “correct” way because that would only interfere with your nostalgia? For example, I prefer hamburger helper to actual beef stroganoff. Taste and smell are so important to me that I will forgo a fresh ingredient for a memorable one. I eat to remember.

There is a part of me that goes against many of my childhood favorites, knowing what I know now about processed foods and packaged ingredients. But wouldn’t you give anything to eat a sloppy joe and be transported to your mother’s table? I know that I would.

Lasagna is universal, and I don’t know anyone who doesn’t love it. This version is my own, and I’ve made it with vegetables rather than a traditional bolognese. But, we’re coming into fall, and I want to get the most out of my more comforting meals. Vegetables are a great way to not only add flavor, but to keep this lasagna on the healthy-ish side. As the weather cools down, and you find yourself in the kitchen more, you’ll want to make this simple and warming Veggie Lasagna that you won’t regret. If you’re not wanting to saute them, feel free to try roasting them! I just didn’t feel like dirtying another dish.

Let’s get started on this recipe! First, we’re going to saute our vegetables one at a time. I do this so they brown and cook nicely. Overcrowding and moisture is the enemy of browning! Start with browning the fennnel, then the bell peppers, then the zucchini. As the zucchini start to brown, add the garlic and oregano. Then add this mixture into the fennel and bell peppers and mix it all together. 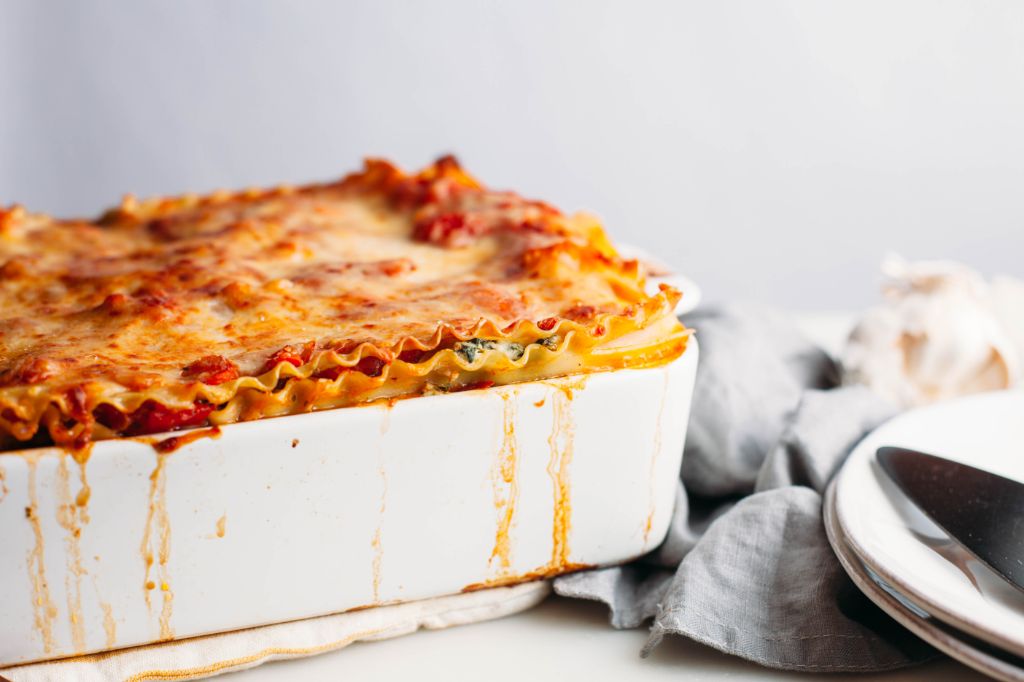 We’ll use the same skillet to make our sauce. Start with diced onion and carrots and let all this soften in butter. After the onion and carrots soften, add the sliced garlic and oregano, and cook for another minute. Now add the tomatoes, crushing them with your hands into the pan to break them up. Bring to a boil and then lower to a simmer, simmering uncovered for about 20 minutes.

While this cooks, boil some water for your pasta. Then we’ll prepare the ricotta mixture. First, defrost your spinach in a colander, running hot water over it until no more ice remains. Use your hands to squeeze out any excess moisture. Then use a paper towel to squeeze out any remaining moisture. Add this to the ricotta in a big bowl, and add 1/4 cup parmigiano reggiano, and 1/4 cup of pesto. I use any store bought pesto. Give it a half teaspoon of kosher salt and mix it all together with a spoon.

Boil your pasta to al dente, about 10 minutes. I used wax paper laid out to lay the noodles until they cooled enough to handle. If you’re using oven ready lasagna, do not boil the pasta! To prepare your lasagna, start by layering a half cup of sauce on the bottom of your 9 x 13 inch dish. Then add a layer of noodles. Over the noodles, layer the ricotta, then all the vegetables, sprinkle on the mozzarella and then another layer of sauce.

Next, add another layer of noodles, a layer of ricotta, mozzarella, then sauce. The last layer is noodles, then sauce, and top with the remaining mozzarella and parmigiano reggiano. Cover this in foil, and bake for 30 minutes. Then remove the foil and bake an additional 30 minutes or until the top is browned and bubbly. See the full recipe below. 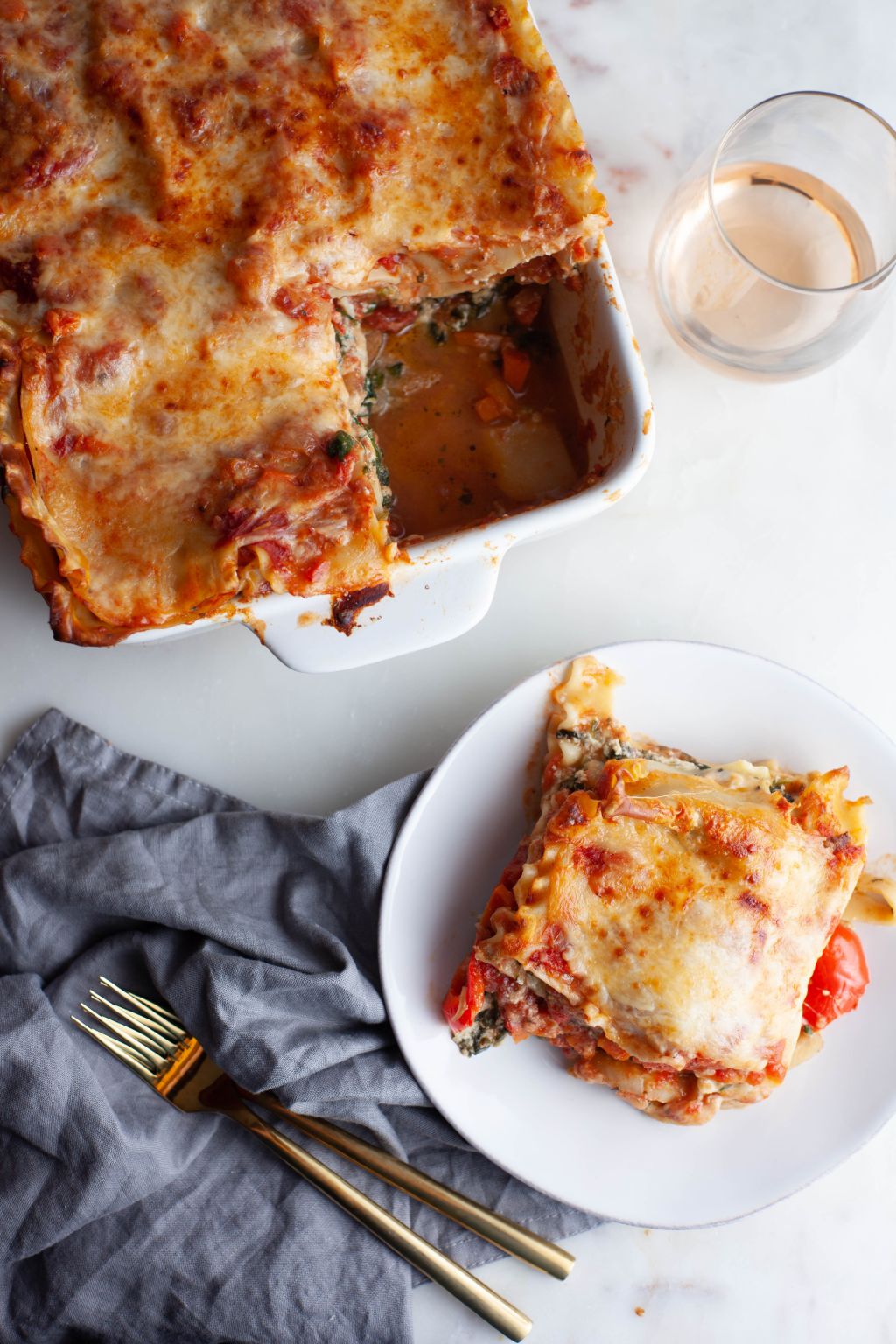