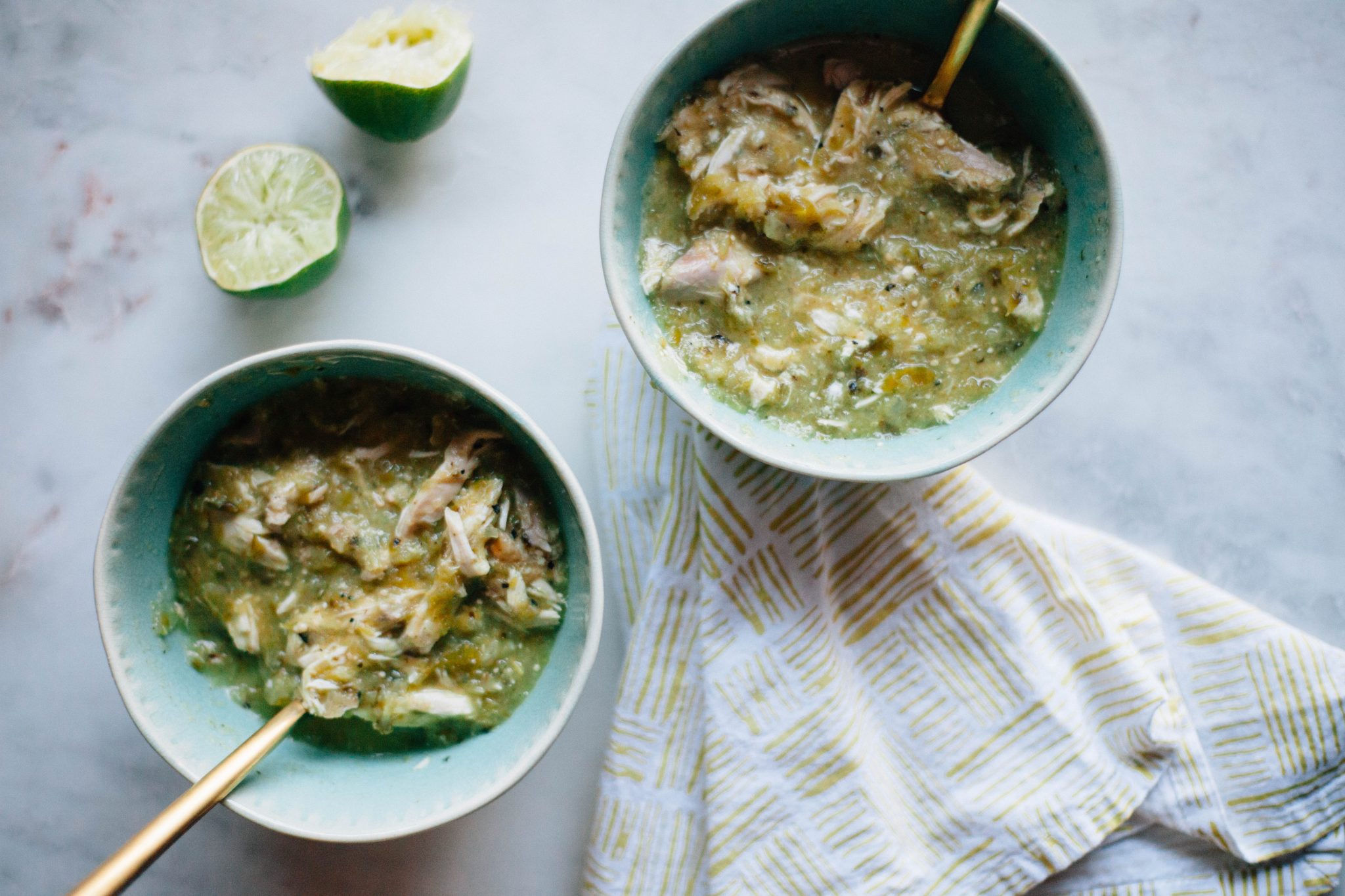 My friend Kevin is one of those great cooks that eyeballs everything and uses intuition in the kitchen, but it always turns out perfectly. So when he made this Chicken Chili Verde at a dinner party and I asked for the recipe, he gave me a very loose calculation of the amounts of ingredients needed. I tried to replicate it, and it turned out pretty different. But man is it delicious, and pretty spicy. So heed my warning, if you don’t like spicy food, sit this one out. On a scale of one to ten, it’s a hard seven.

As much as I really love cooking seasonally, this winter has been brutal and I just needed a little taste of summer to cheer me up. Chili Verde is great for both cold and warm weather, so you can eat it year round. It’s a little bit of an unusual soup, but the best way I can describe it is slightly tart from the tomatillos and very spicy with the texture of tomato soup. The great news about this soup is it’s easy AND healthy. It’s full of nutrients, and it’s flavorful.

Kevin used three different kinds of chiles–Anaheim, Poblanos, and Banana Peppers. You can find all of these at your local grocery store year round. If they only have two of the kinds you need, just get two more of anything they have. It’ll turn out great regardless. I made this with my Green Chile Skillet Cornbread, and they’re great together! The tomatillos make the soup tart, but the peppers bring the heat, so it’s a really balanced dish. If it turns out too spicy for you, you can add a dollop of sour cream to the top, stir it in and it cools the whole thing down. It cuts the heat really well.

Let’s get started on this soup! 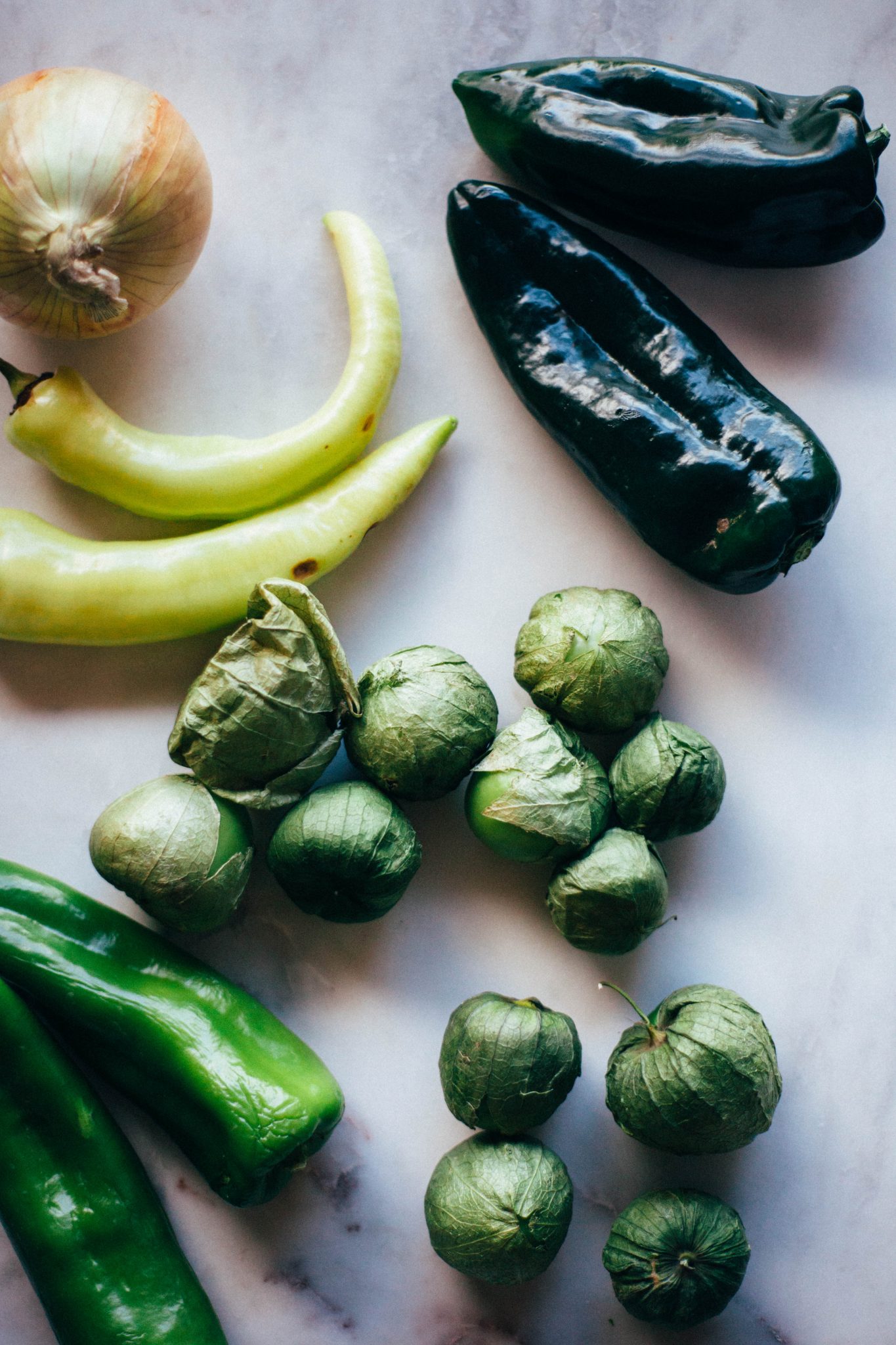 First roast the chiles and tomatillos on one side. No need to turn them, just blacken them on one side. Then quarter your tomatillos and remove the seeds from the peppers with a spoon and chop them roughly. Set this aside and start sauteeing your onions over medium heat in a soup pot. 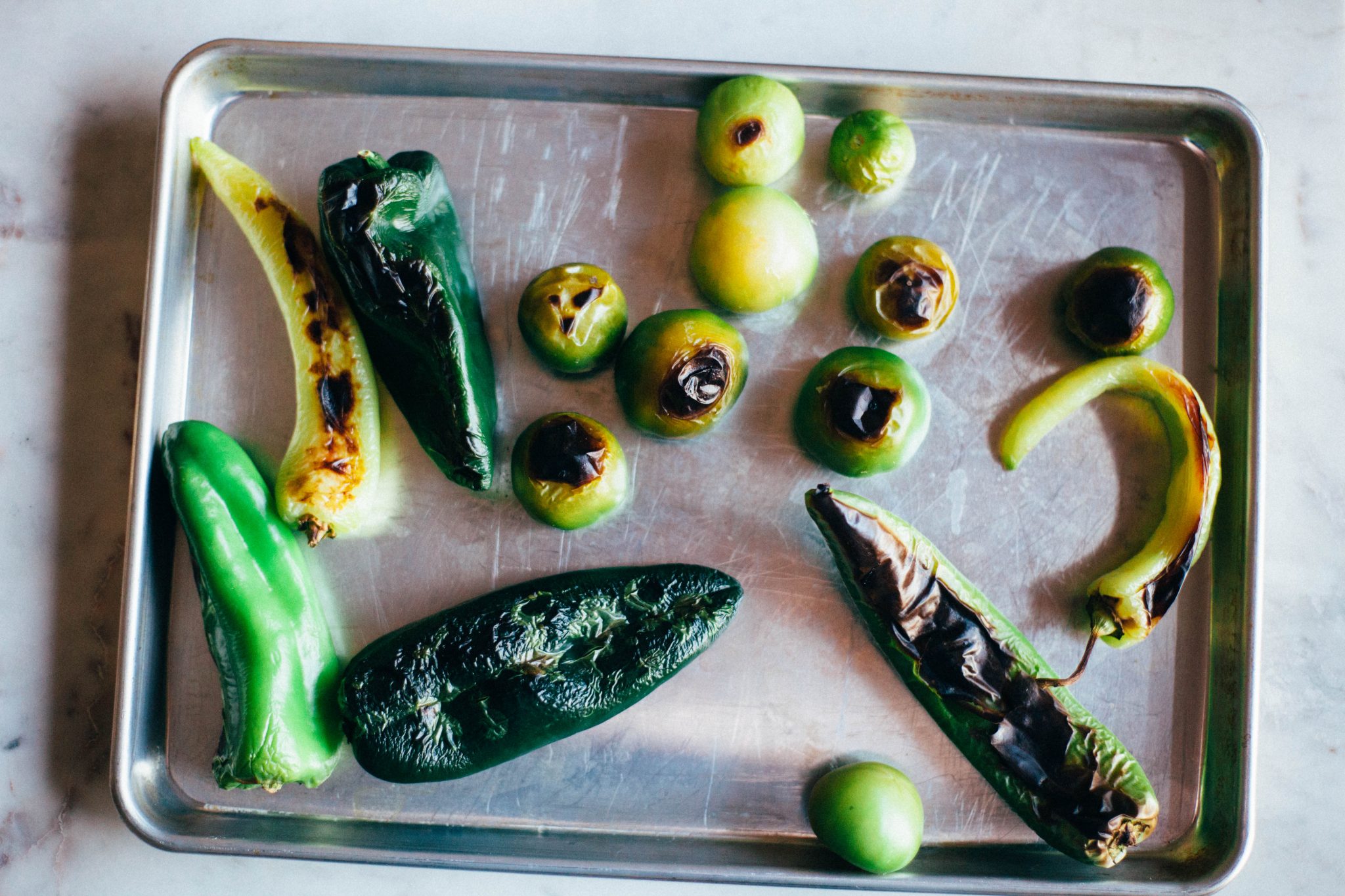 Add the chopped peppers and tomatillos to the soup with some salt and cumin. Give it a good stir and add two and a half cups of chicken broth. It’ll be very chunky. 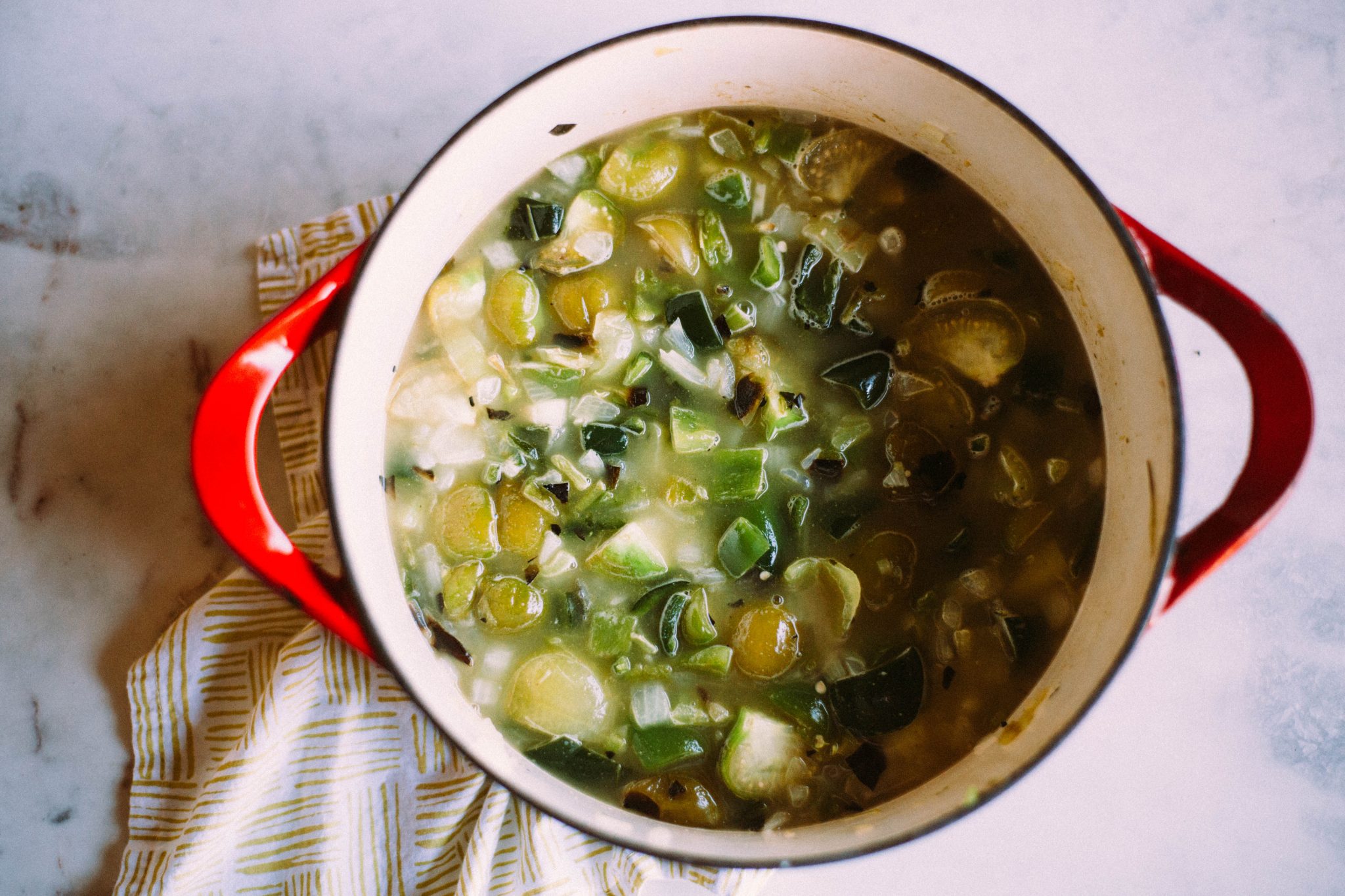 Remove the pot from heat and use an immersion blender to blend the soup into a puree. There will be a few charred bits and skins here and there but it will be mostly pureed. 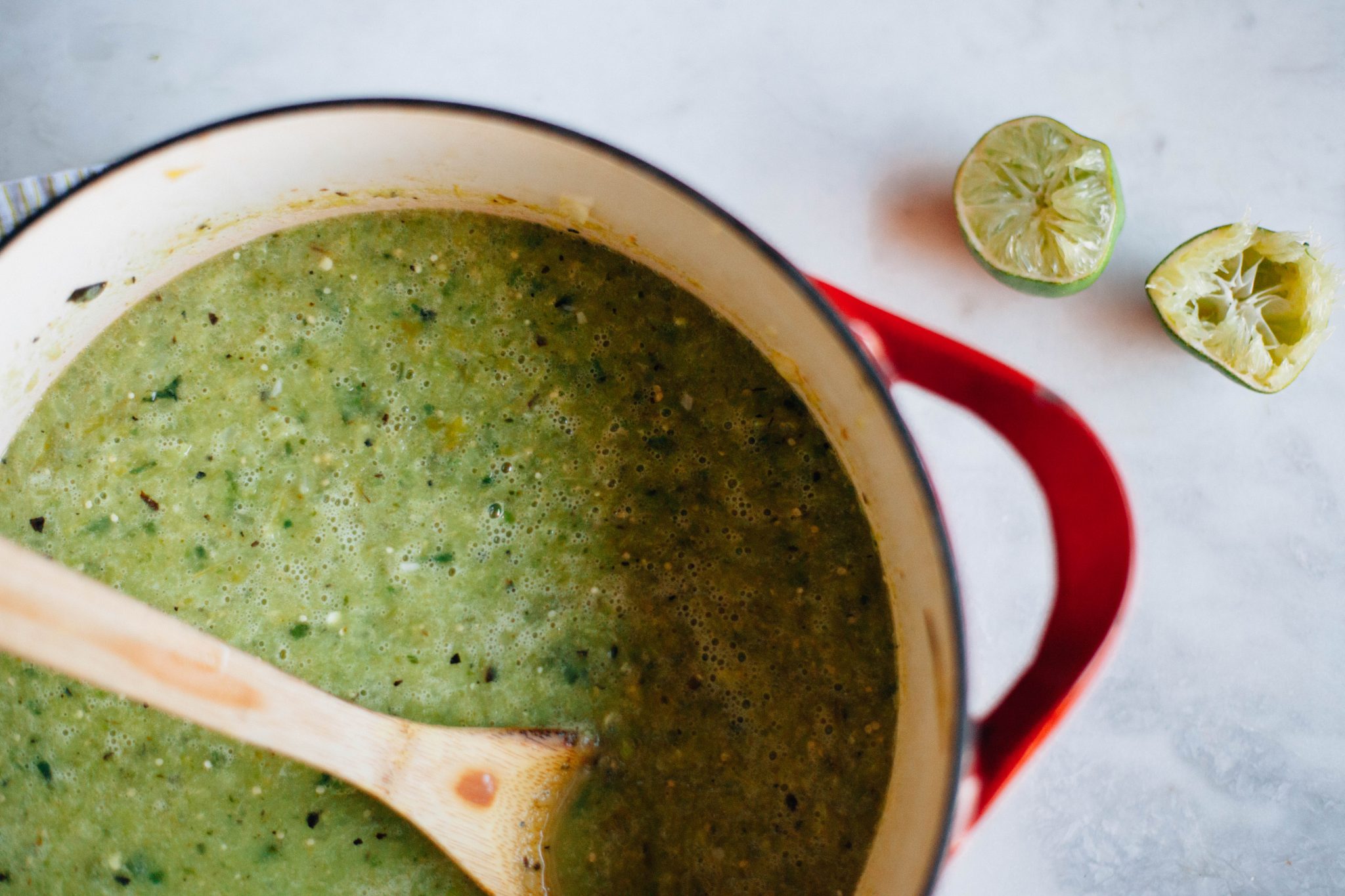 Once the soup is pureed, I add either poached chicken or pulled rotisserie chicken. Then squeeze in some lime and you’re done! Top with sour cream or some tortilla strips.