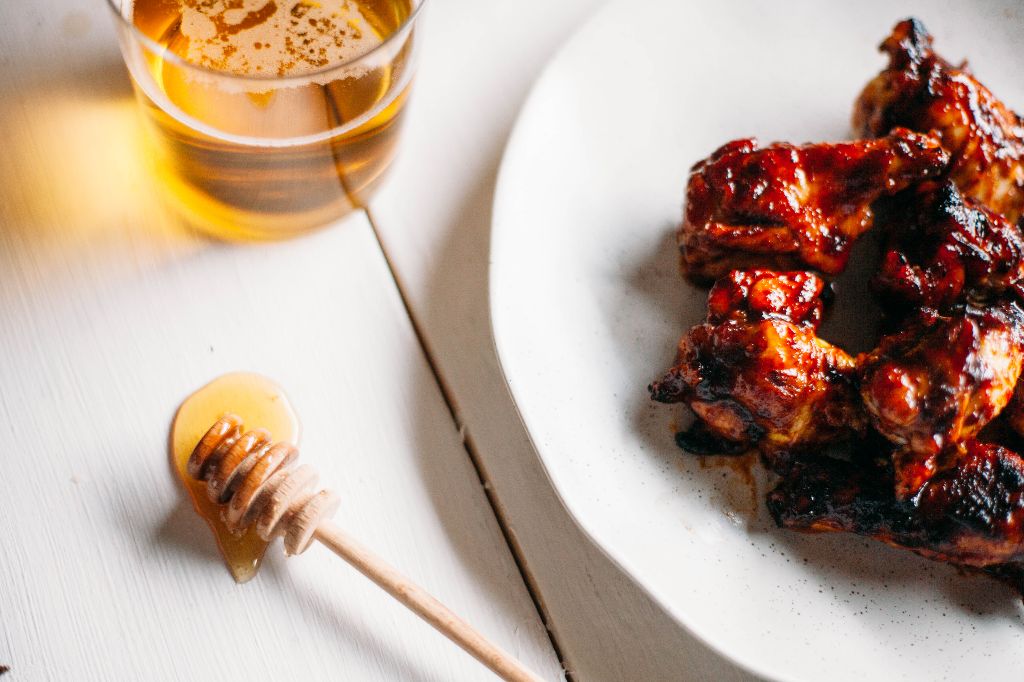 Nothing can top smoked wings in my book. But as a home cook, who writes a blog for other home cooks, I realize that smoking chicken wings at home can be a tall order. I get that. I am a kitchen equipment minimalist who lived for years without a kitchen and made do. So I decided that the next best thing is broiled wings. They taste like they’ve come right off a grill, but they’re really broiled just inches from the top of your oven.

END_OF_DOCUMENT_TOKEN_TO_BE_REPLACED 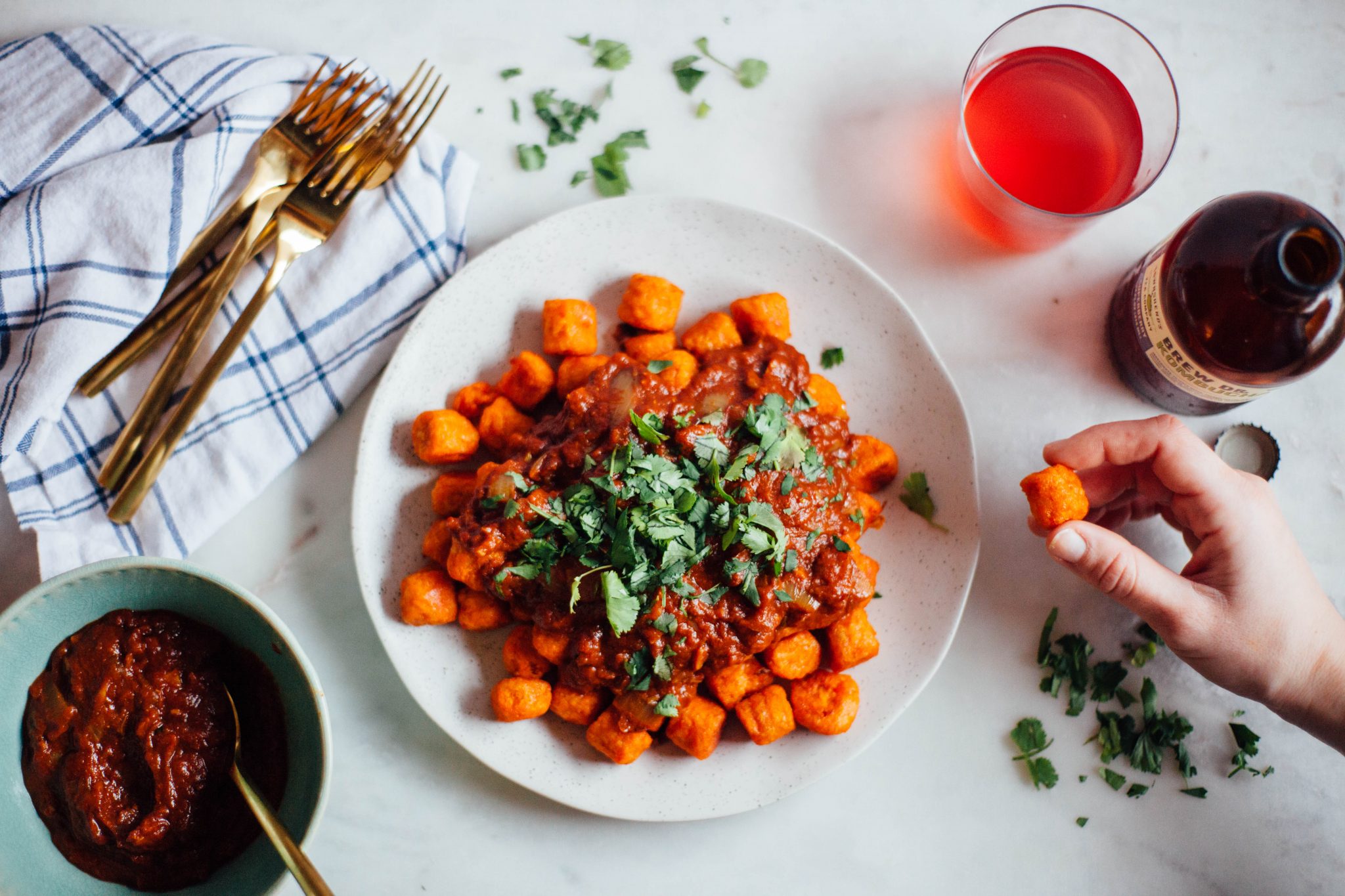 Appetizers are pretty much the only reason for me to attend a superbowl party. I’m not a sports person. Ask me who’s in the superbowl and I will laugh at you and tell you I only know what I’ll be eating on February 4. The answer is Curry Poutine Sweet Potato Tots. That’s right, I basically combined two of my favorite things: tater tots, meet curry gravy.

END_OF_DOCUMENT_TOKEN_TO_BE_REPLACED 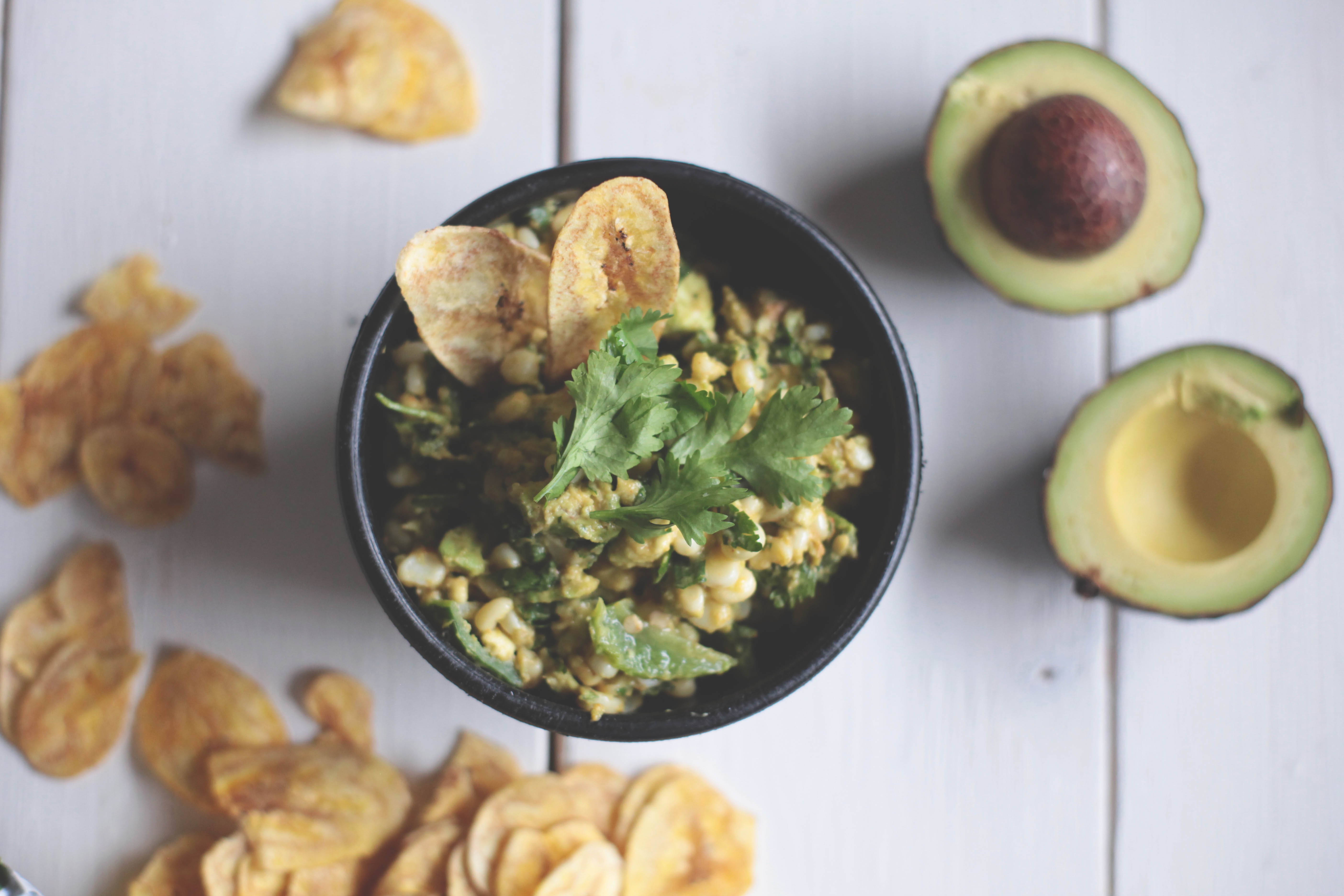 This weekend I injured my big toe. Ridiculous, I know, but it’s also four days before I leave for Europe where there will be an ungodly amount of walking–something I’m not excelling in right about now. This is where Sam comes in. He went out to get me dinner and made me keep my foot elevated and iced. You know you’ve found the right person when you realize they’re better than you. He’s the caretaker, the cleaner, the one who’s better at details, the one who makes me take medicine and forces me to do things that aren’t in my nature (like relax). The man wakes up early to make me coffee even after a late night. He’s by definition much much better than me. So excuse me if this week I take it a bit easy on the blog. I’m up to my eyeballs in things that need to be done before my trip, but basically Sam is doing them all. So even though I feign busy-ness, he’s the brains behind the whole operation. He also usually has a cameo in my blog posts. He’s the guy holding the light or the one squeezing a lime. He even takes some of these pictures!!! But before I reveal all my secrets, I want to give him a proper shout out for everything he does for me and for putting up with my clumsiness that may or may not ruin our vacation.

This is definitely an easy pre-vacation recipe, and if you’re feeling extra lazy, just omit the peppers and corn and you have really good guacamole! I had to post this before my trip because in Paris they have approximately zero Mexican restaurants. That was the thing I missed the most when I was living over there for a summer. But lo and behold I found the most amazing hole in the wall taco shop that also happens to be a speakeasy, complete with a secret door. They had the best margaritas and even better tacos. So I dedicate this post to that lovely place where I’ll be returning in one week (eeee!!!!).

There’s nothing worse than bad guacamole. You know that runny green goop they serve you at a bad Mexican restaurant? Good guac is chunky and full of cilantro with a hint of lime, and I have to share this recipe which I’ve been making for years now. And of course it has corn because, hey, it’s me. You’ll have to roast a poblano pepper, which is honestly the fun part. Do this on a gas stove top or under the broiler and immediately seal in a plastic bag or a bowl with a cover until the steam makes the skin easy to peel off. While you’re at it, roast and char the corn, too. YUM!!! You have to make this and put it on some delicious pulled pork tacos or serve with some plantain chips. Per the usual, citrus juice is usually the key ingredient in almost anything to keep it fresh tasting. Remember the rules, salty, sweet, acid, fat. That’s how most good recipes are made. You don’t even have to share if you don’t want. I won’t judge you. Try my recipe below and let me know what you think!!!

a pinch of salt

a pinch of garlic powder

half of a lime

Preheat the oven to 400 F. Remove corn husk. On a square of aluminum foil, place the corn, drizzle with olive oil and roll the corn up in the foil, securing the ends. Place on a baking sheet for 20 minutes. Remove corn from foil.

Turn on the broiler. On a baking sheet, add the corn without foil and the pepper. Place in the top rack of the oven, letting the skin of the poblano char and blacken. The corn will also brown slightly. Turn the corn and poblano periodically, charring the poblano until all the skin is blackened and bubbly. The corn will only be slightly browned, so you may remove the corn before the poblano is finished.

Immediately place the pepper in a plastic bag or a bowl covered with plastic wrap. Let it sit for 15 minutes. Once corn is cooled, cut the kernels off the cob and place into a medium sized bowl.

Roughly chop your cilantro leaves. Add to the corn. Slice the avocado down the center, remove the pit, and scoop insides into the corn mixture. Add the cumin, salt, paprika, and garlic powder. Using a fork, mash the avocado slightly until chunky.

Once pepper has sat for 15 minutes, remove the exterior flesh with your hands, discarding. Slice the poblano in half long ways, and use a spoon to remove the seeds. Discard the stem and dice the pepper. Add to the avocado mixture, stirring to combine. Juice the lime into the mixture and stir. 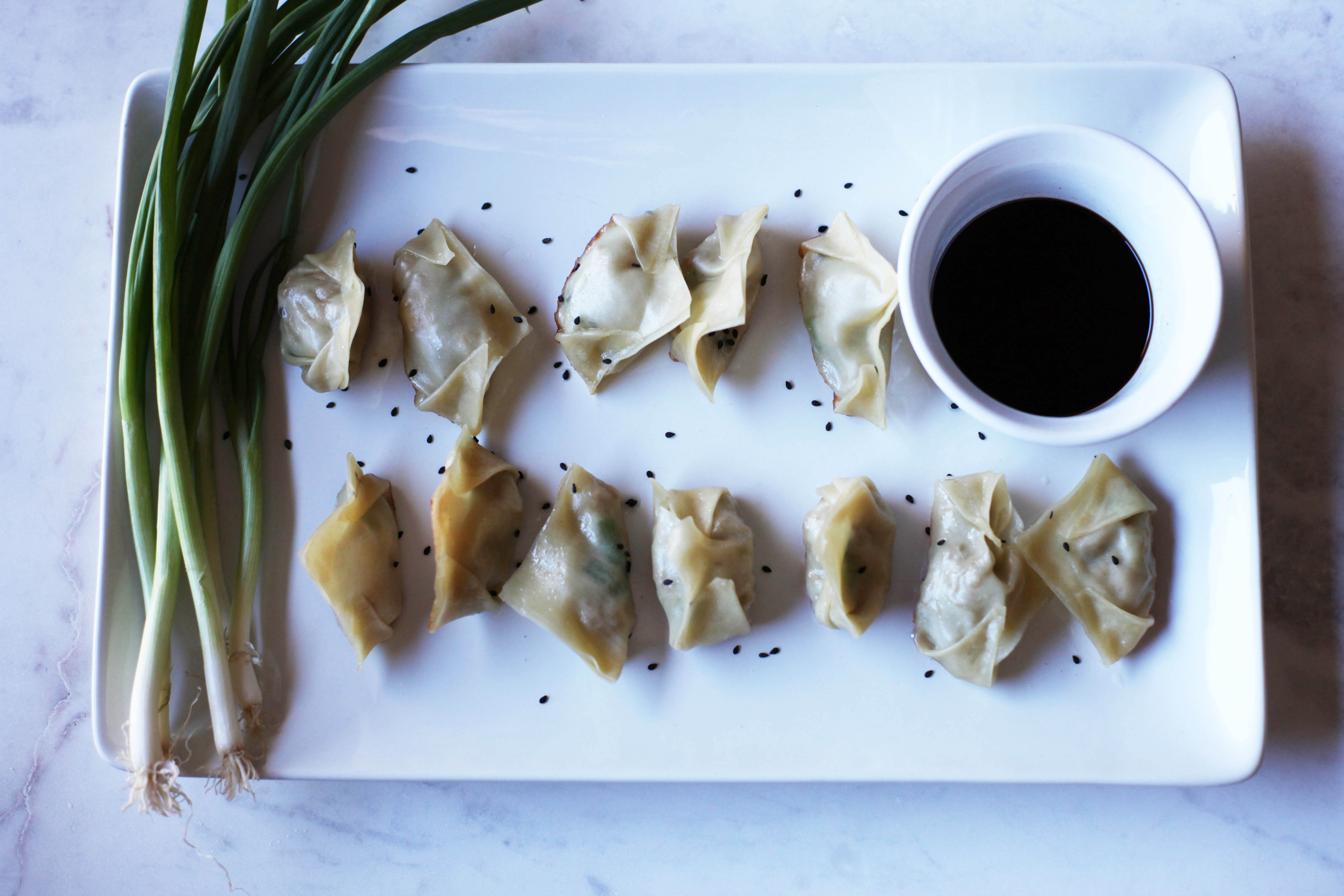 Let’s be honest, wrapping potstickers takes awhile. But once you’ve cooked them all, you’ll be on the fast train to food heaven. I love these things. The filling is quick to make, so you have all the time in the world to wrap them and steam them. When I was in college, I used to make curried lentil potstickers, but they’re not quite as good as these guys.

I decided on ground chicken for the filling with scallions, ginger, soy sauce, and black sesame seeds. You can use regular sesame seeds, but I liked the added flavor of black sesame. The ginger and scallions give it a freshness that really balances the whole thing.

Once you’ve mastered the potsticker, you can try all kinds of fillings. Like maybe shiitake mushrooms and bok choy. Or pork and vegetable. If you want to try something totally different, add these to chicken stock with mushrooms and scallions, and you have won ton soup. All of these would be great! 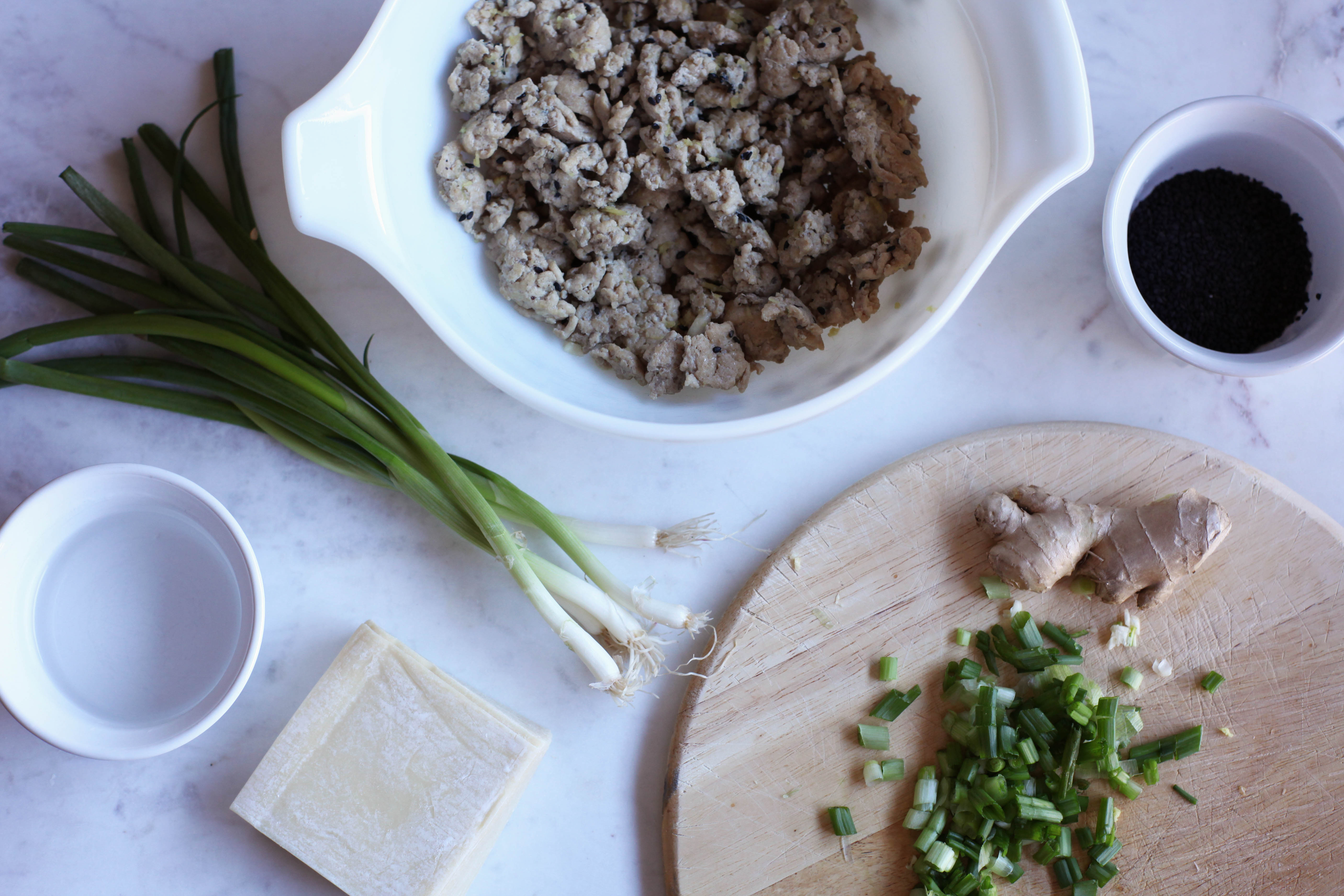 Ok, here we go. Won Ton wrapping 101. I have faith in you. If you want to use the round wrappers, they’re a little easier to use. Pro tip: when you can’t get the seams to stick together, wet your thumb and forefinger and get the outsides of the seams wet too. It helps. 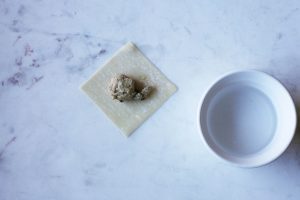 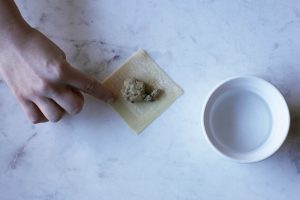 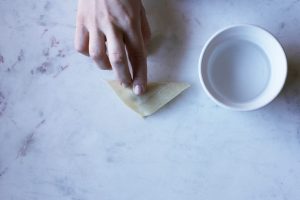 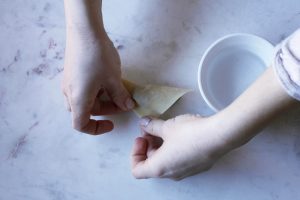 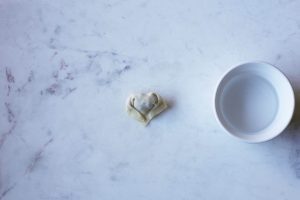 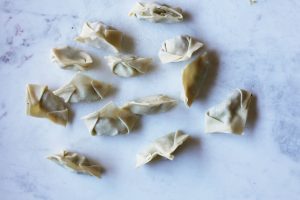 Into the pan they go! Potsticker Party! A little oil and some waiting, and the bottoms should be nice and crispy. Then add a little water and steam with the lid on for a few minutes. 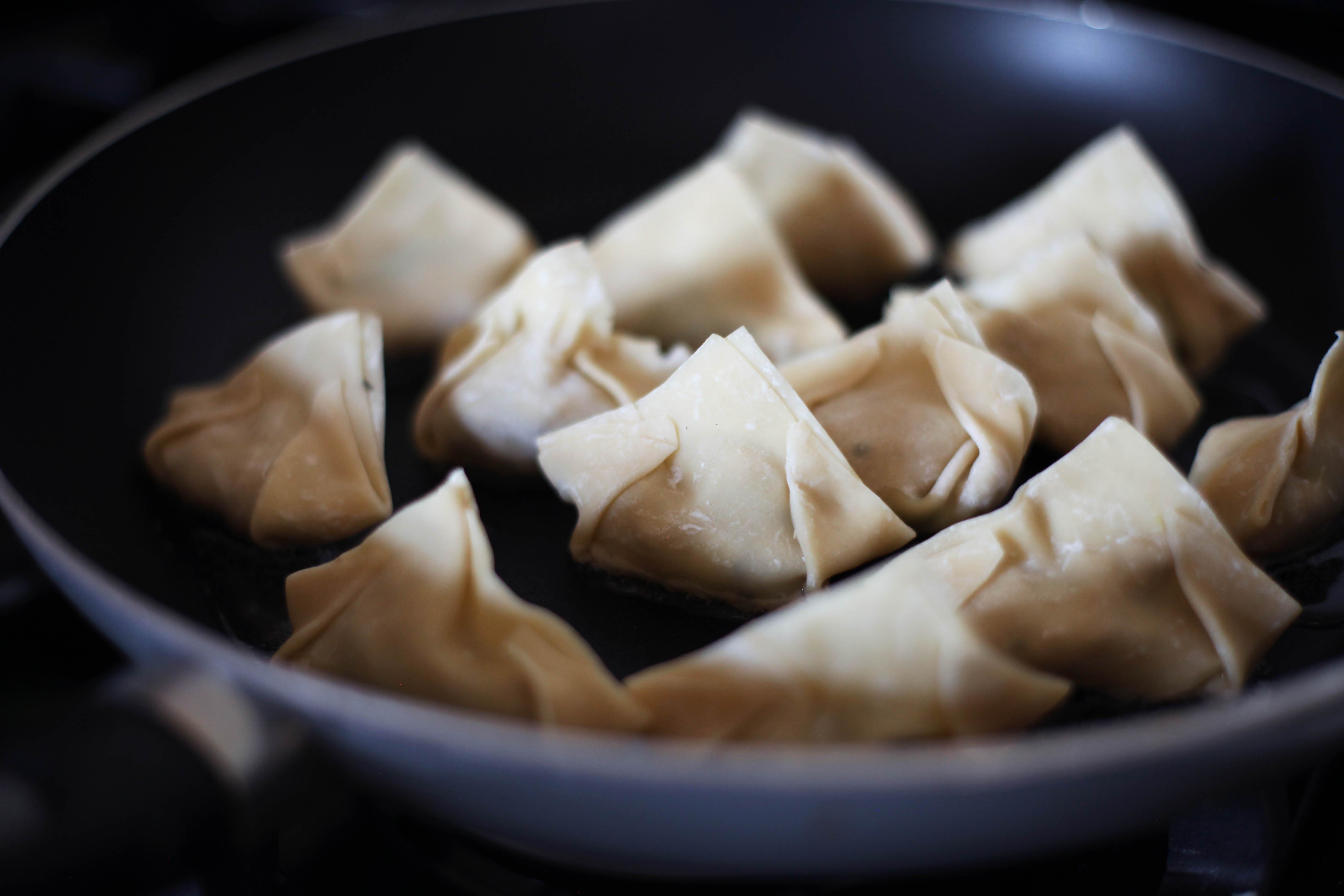 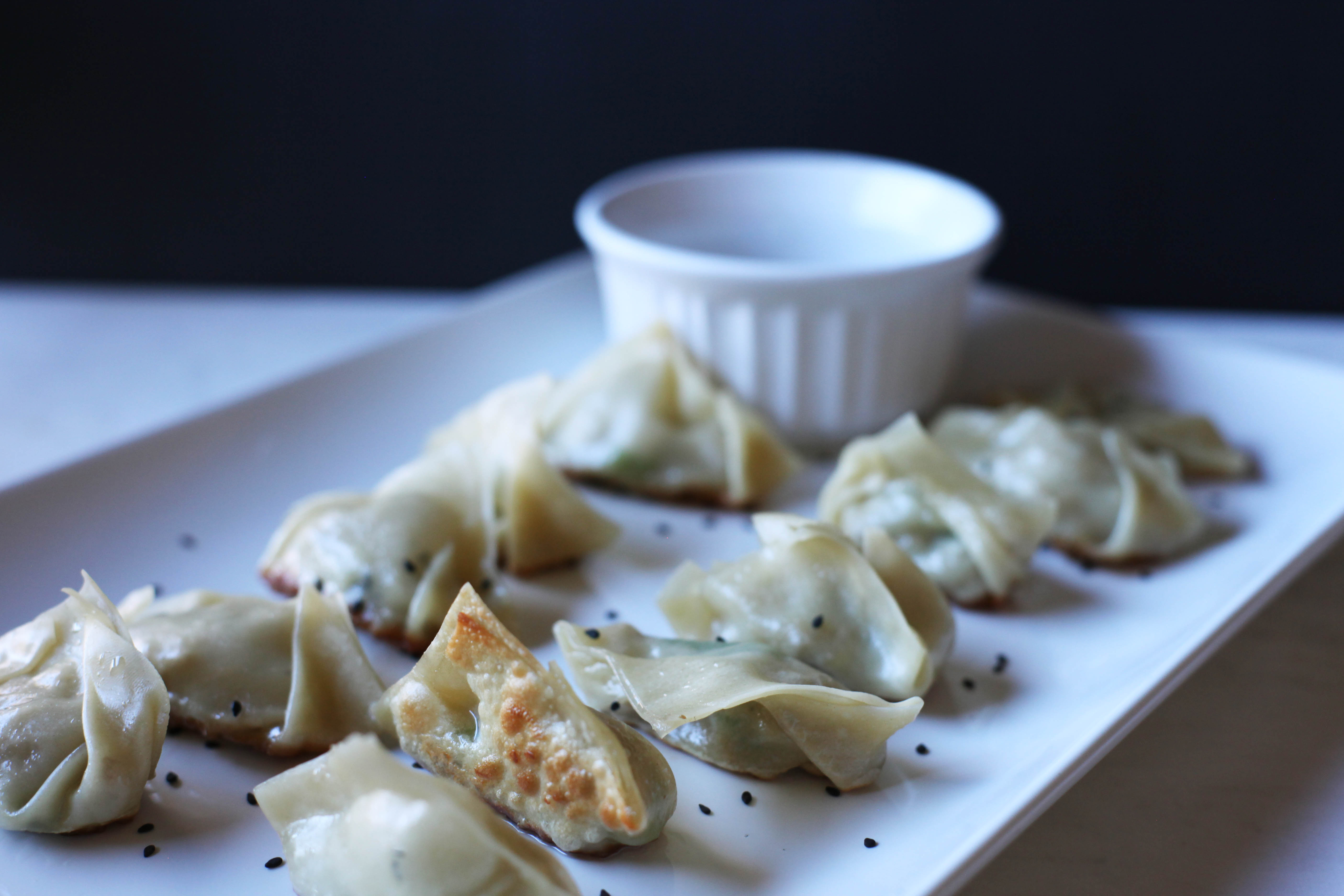 1 tbsp soy sauce, plus some for dipping

In a large pan over medium high heat, add the sesame oil. Once hot, add the ginger and garlic. Stir for about 30 seconds until aromatic. Add the chicken, soy sauce, sesame seeds, salt and pepper to taste, and break up the chicken until it’s completely cooked, about 5-7 minutes.

Add the scallions to the chicken mixture.

Set up a place to wrap your pot stickers. Get a plate to put the finished potstickers on, a surface to wrap them on and a small bowl of water. Add a little spoonful of the chicken to a wonton wrapper. Wet your finger in the water and run it along the edge of the wrapper. Fold the wrapper diagonally so that it makes a triangle. Press the wetted edges together until they form an unbroken seam. Fold the left and right corners of the triangle up to meet the top of the triangle and wet to keep together.

Do this until all the wontons and chicken mixture are gone.

Heat a large non-stick pan over medium-high heat. Add a thin layer of vegetable oil (very thin). Add half of the potstickers, seam side up. Heat for 2-3 minutes until the bottoms are browned and bubbly. Lower the heat to medium and add 1/2 cup water. Cover immediately and let them steam for 5 minutes. Remove the lid, turn the heat up to high and let all the water evaporate (about 3 minutes).

Serve with soy sauce and chili paste if desired. Enjoy!