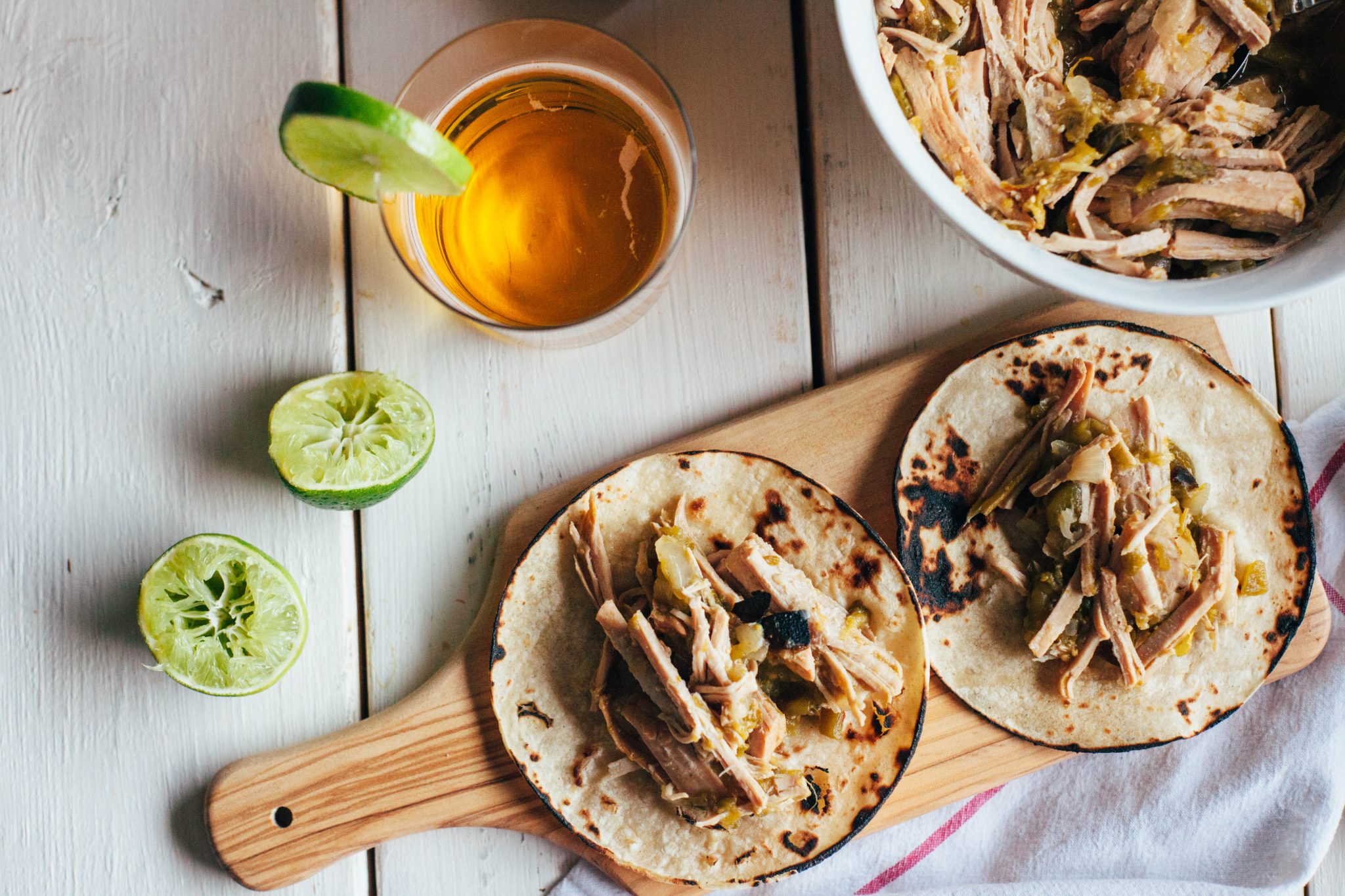 “Positive and Present” is something Sam and I say to one another a lot. We strive to be present when we’re together and to unplug. I wish it was easy for me to just stop looking at my phone, but it takes real willpower. So in 2018, I’m trying to be present as much as possible. To foster real relationships and spend more time with family and less time on my phone. So when I got an Instant Pot, I realized that this was an easy way to spend less time in the kitchen and more time doing more important things. People, if you only knew just how much time I spent in the kitchen, you’d die. It is unbelievable. Cooking Thanksgiving dinner was nothing to me.

I am not big on fancy kitchen equipment. I lived in a house with no kitchen for two years and cooked everything on a hot plate. I’m a minimalist to the extreme, and I’m always testing myself to see if I can get by with less. I was skeptical of the Instant Pot at first, but I was shocked at how quickly it can make what a slow cooker would take all day to cook, with the same amount of flavor.

These Green Chile Pork Carnitas took just over an hour to make and were perfect with corn tortillas and a little lime juice. You basically throw everything in to the Instant Pot and let it work it’s magic. I did char the tomatillos a bit first to give it a little extra flavor, but it was so easy! It could easily be thrown together after work. So throw it all in, leave it, and go do something else. Go for a run! Read a book! Spend time with your family!

So here’s the down low on the how to work the Instant Pot. It makes some weird noises. Steam comes out. The toggle on the top wobbles around and makes you wonder if it’s normal. It is. But it’s pretty simple once you get the hang of it. But heed my warning! Make sure you wait until the float valve is in the down position before you open the lid. It took about 25 minutes for mine to go down, so be patient or you will have a huge explosion.

Let’s get started on this recipe! First you char the tomatillos under the broiler. You’ll want to remove the husks first, and the outer skin of the tomatillos will be sticky. That’s ok! No need to rinse it off. Let them broil until the top is blackened and blistered and then remove from the oven and cut them into quarters. 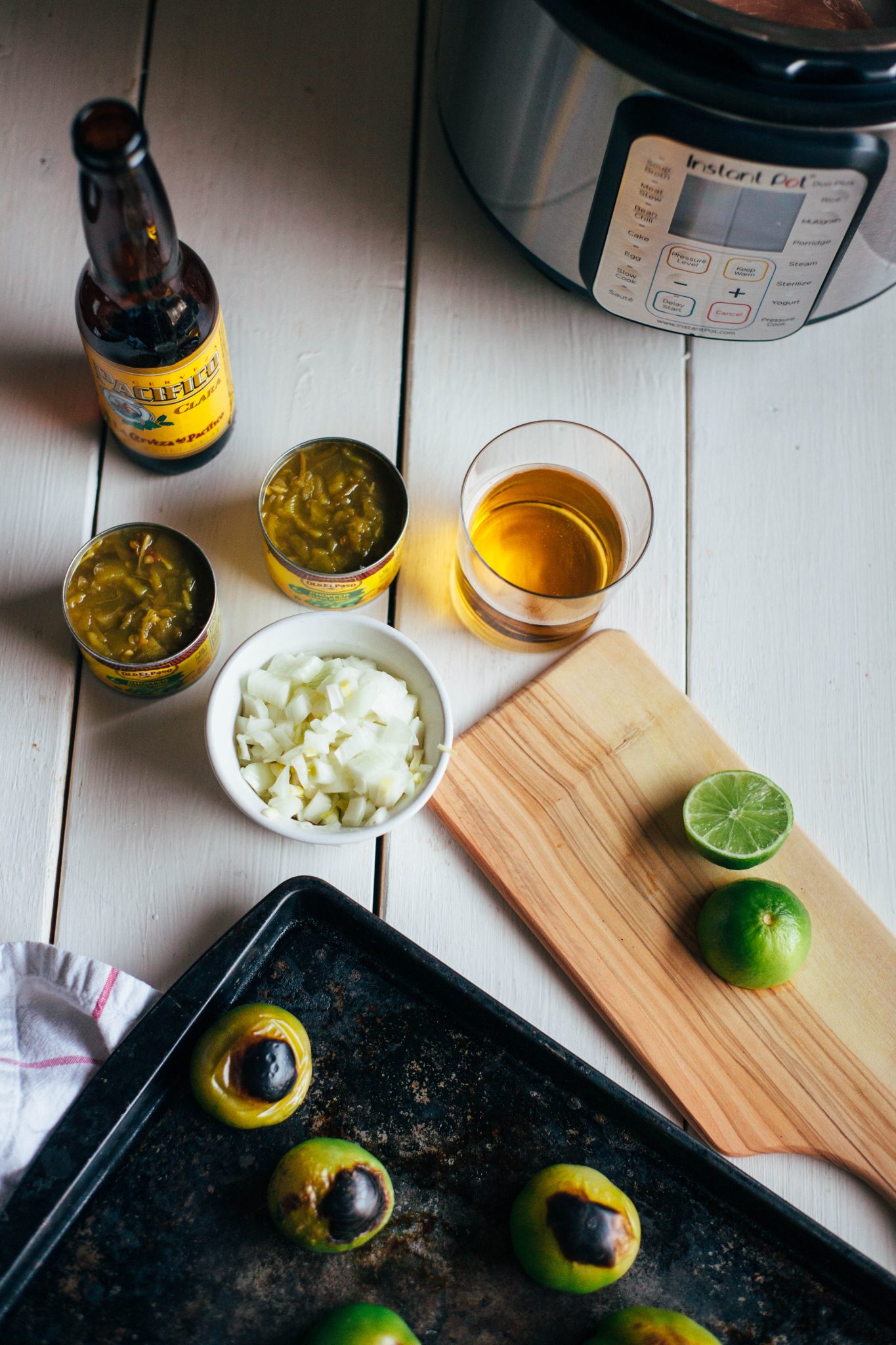 Next you’ll add everything to the Instant Pot. Just throw it all in and top it off with that lovely Mexican beer. Then pressure cook it for one hour and let the pressure release before opening.

Once you’re ready to serve, char up some corn tortillas over a gas stove or in a hot pan. Serve with limes and avocados and some yummy beer! 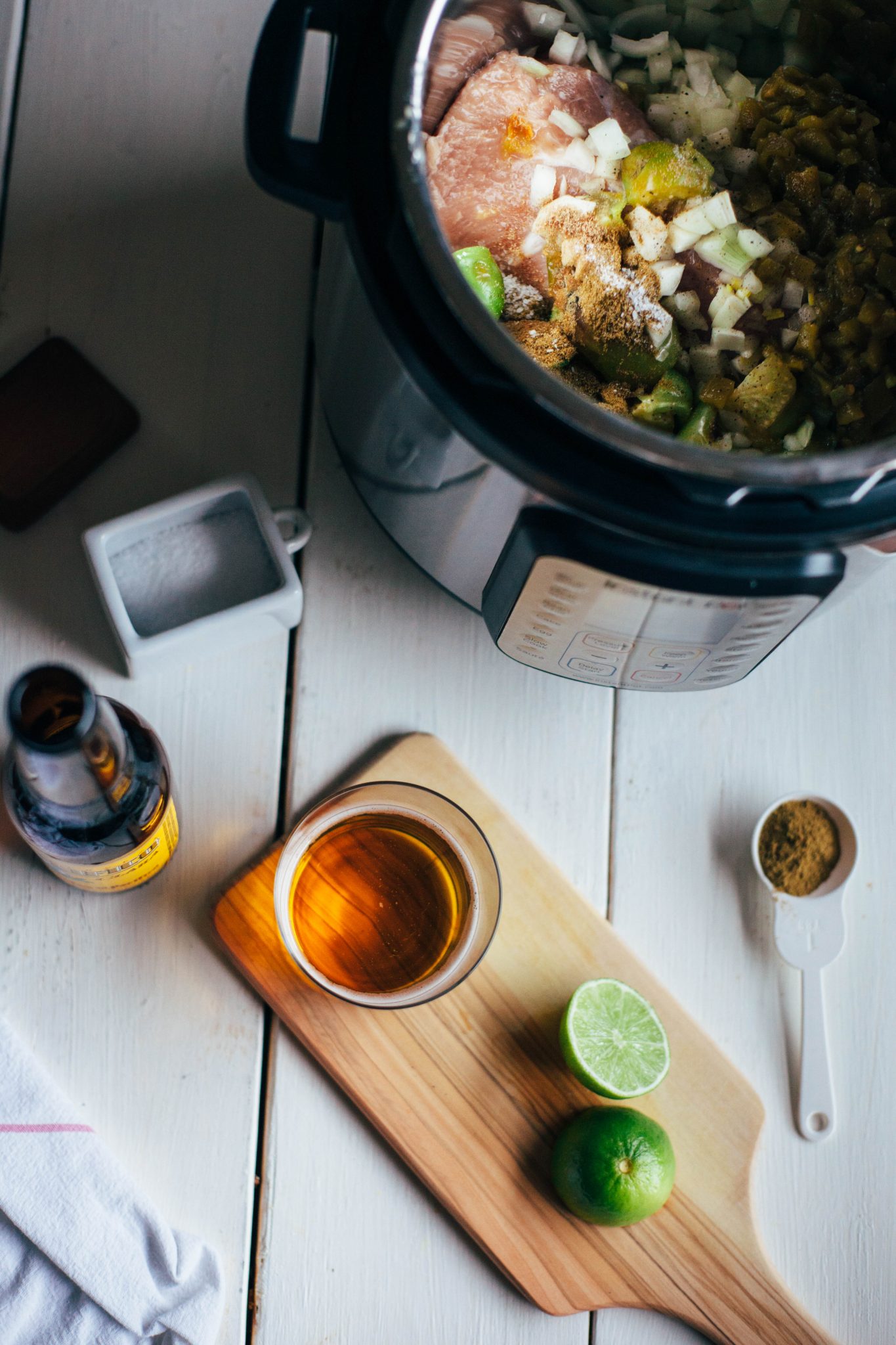 Such an easy dinner! If you don’t have an Instant Pot, you can cook this in a slow cooker over low for 6-8 hours instead.

What other Instant Pot recipes have you tried? I’m thinking about trying risotto in mine! See the full recipe for Instnat Pot Green Chile Pork Carnitas below.