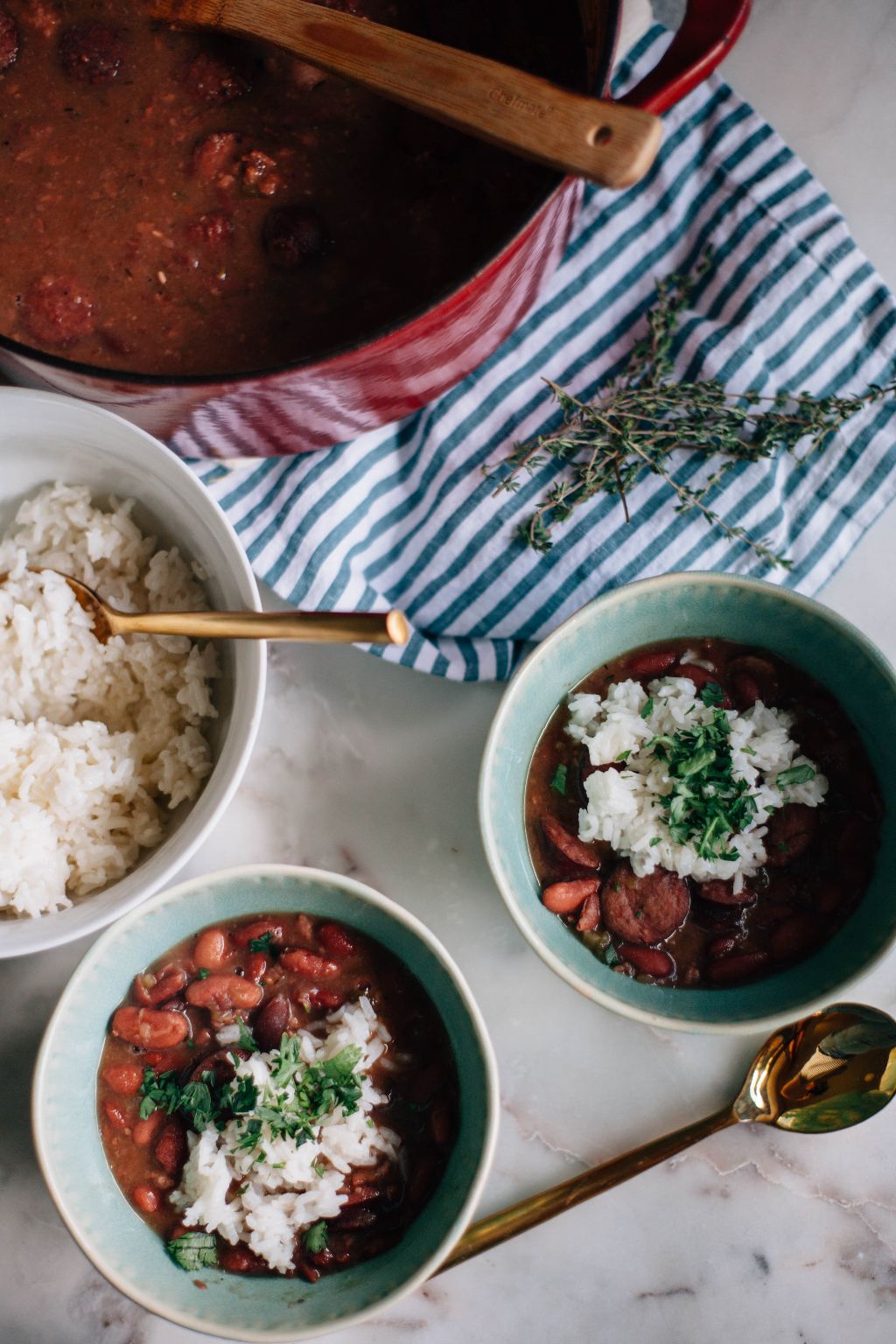 One of the best ways to cultivate patience is to cook a pot of red beans and rice. It’s not a terribly fussy dish, but it’s such a slooooow process. Now that Mercury is in retrograde, I have no choice but to slow down. Anyone else feeling the effects? But we adapt any way we can, and for me that means going along with the slow pace, making a loaf of sourdough on the weekend and cooking a big pot of red beans and rice for the week ahead.

In Creole culture, making red beans and rice is a Monday ritual. A simple pot of beans to let simmer on the stove while you do the laundry. I love a good routine, and my intentions this week are to slow down, to take my time on dinner, to stop and breathe and look around. I have a feeling this recipe will now be part of my Sunday meal prep routine.

It’s also worth mentioning that beans as a meal are entirely underrated! They’re delicious and creamy, and there are a million ways to make them special. Served on toast or with a toasty crostini for dipping. Sometimes, I just cook up a pot of white beans with garlic and lemon, and eat it for dinner. It’s surprising how good it tastes after a long day when the last thing you want to do is cook. 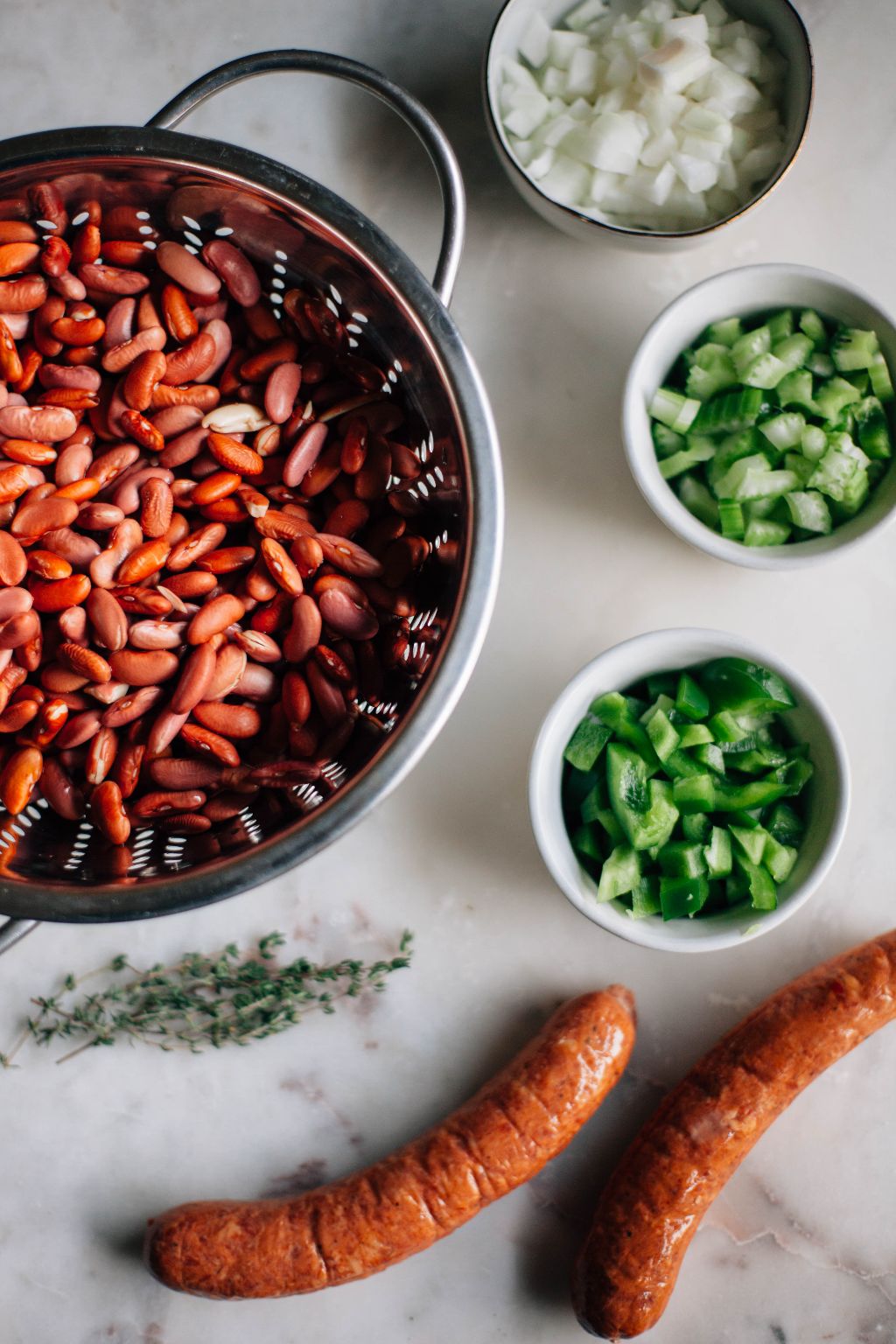 Let’s get started on this recipe! First, we want to prep our celery, green pepper and onion, which are the Cajun trinity–in almost every Cajun dish. Then cut your sausage into half inch slices and dice the bacon. In a big soup pot, add the bacon, cooking until browned. Then add your onion, green pepper and celery to the pot, cooking for awhile until the onions are translucent. Add your thyme, garlic, cajun seasoning and andouille sausage, browning the sausage for a few minutes. 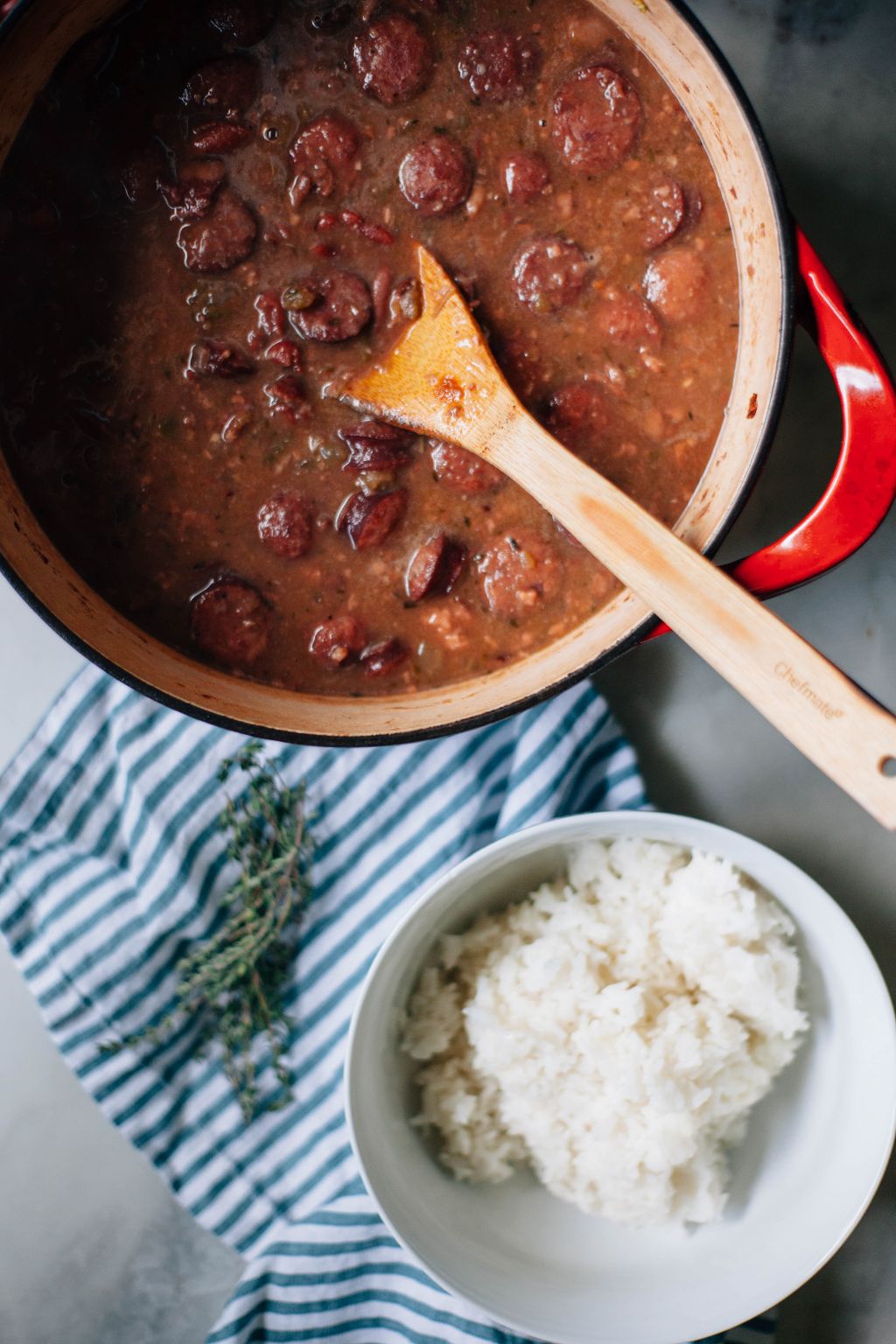 Add the chicken broth, bay leaves, salt and pepper. Bring to a boil and then turn down to low and simmer for 2 hours. 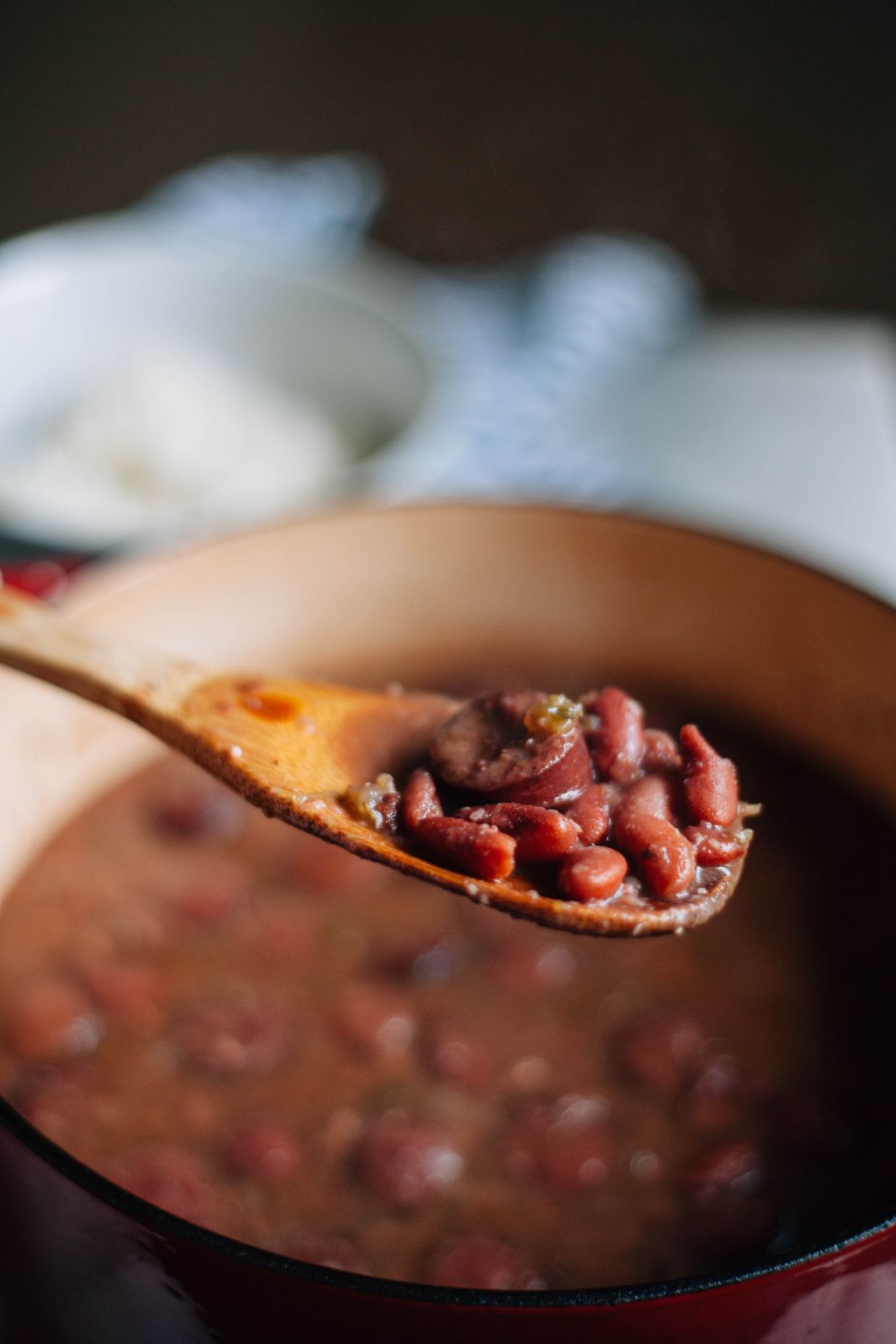 To get the creaminess of red beans and rice, use an immersion blender to blend a portion of the beans. Then stir it together. 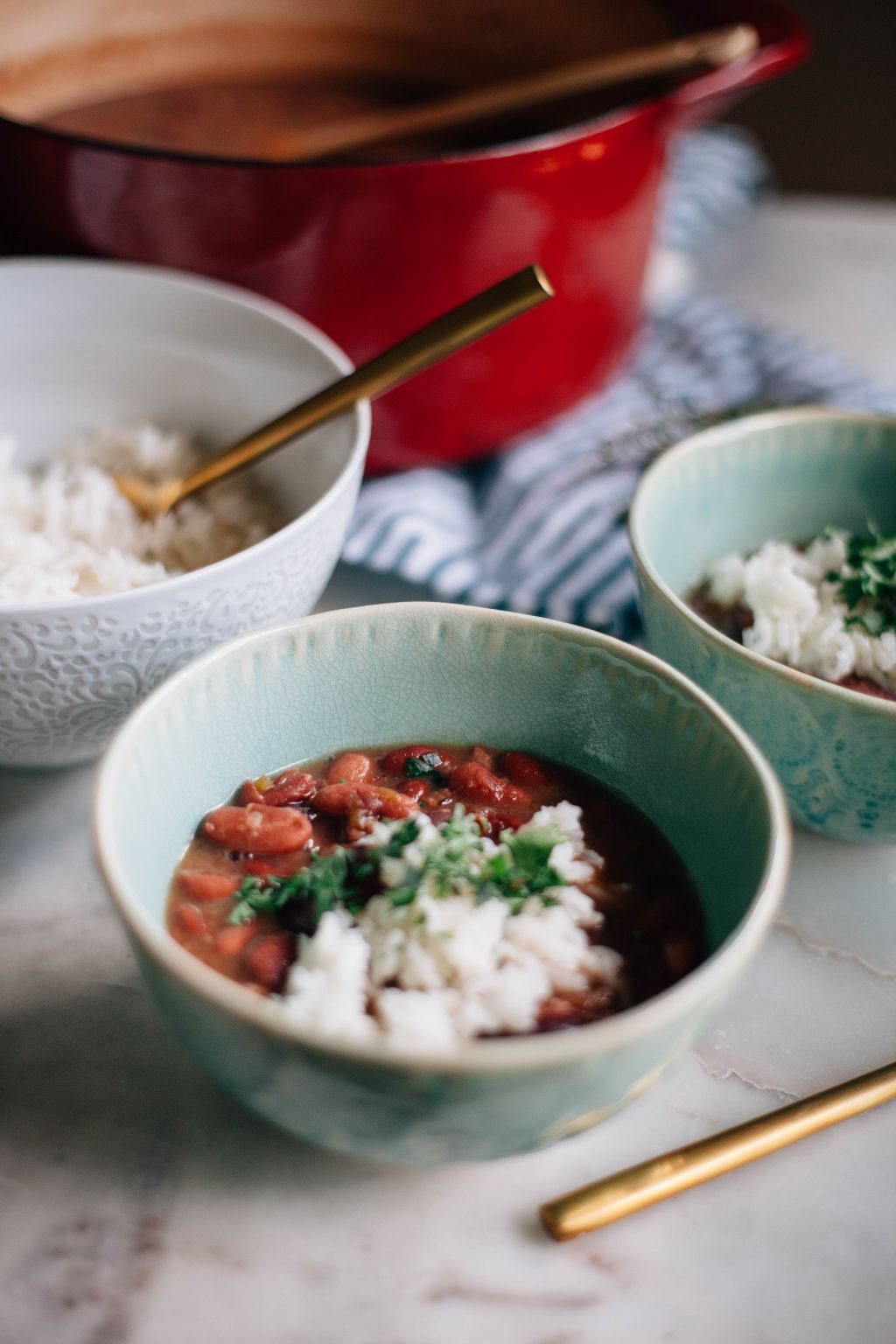 Taste for seasoning and serve topped with white rice. See the full recipe below. 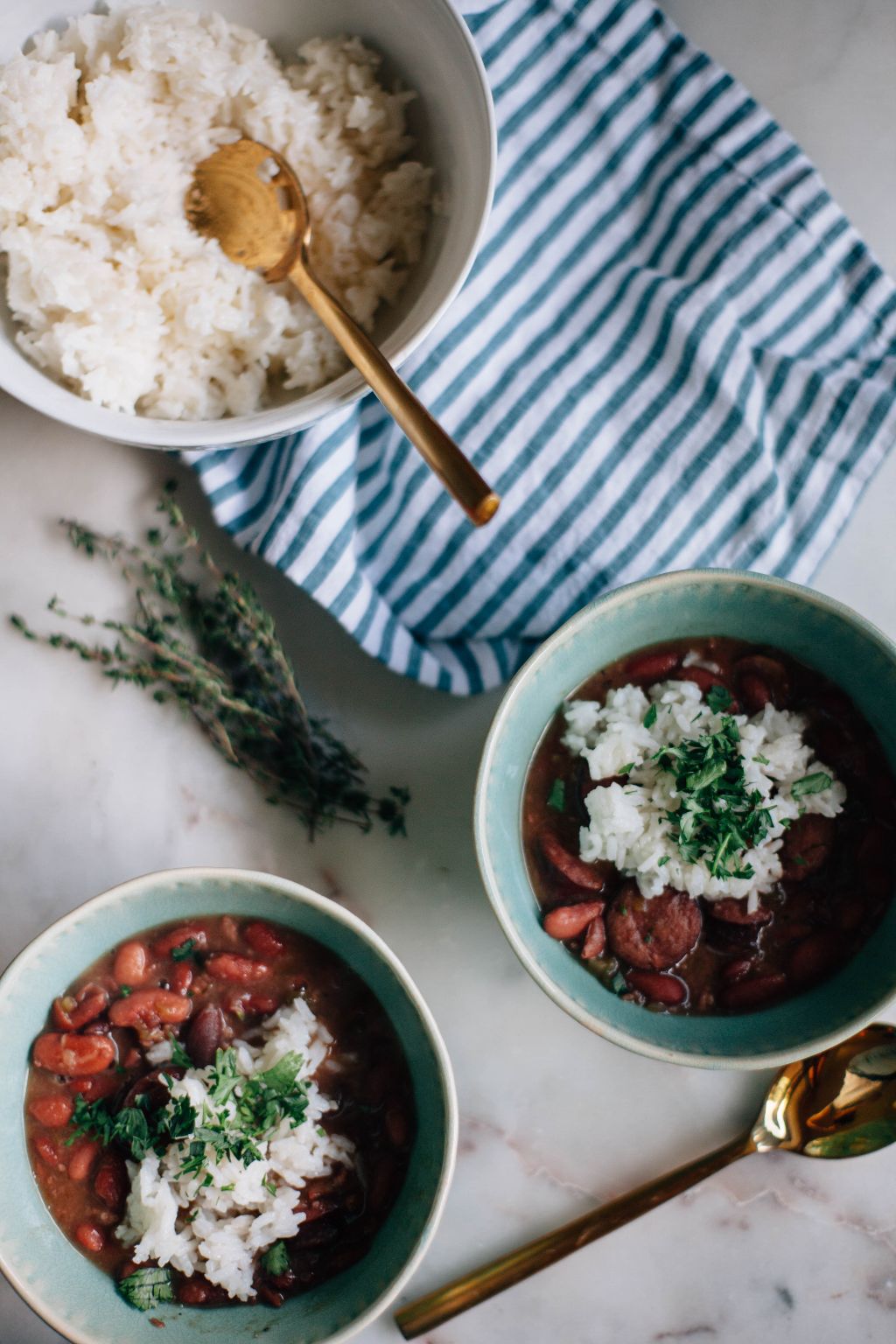 5.0 from 1 reviews
Red Beans and Rice 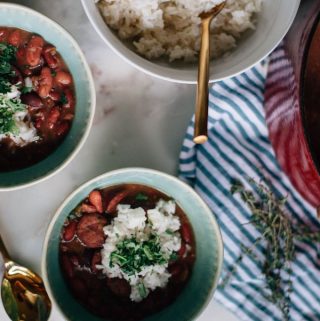