I could not be more excited about the genius of this recipe. I love fried rice more than most things, but this Peanut and Bacon Fried Rice is a real keeper. I had to feature it on my cooking show, Sounds Weird Tastes Good, because it just sounds so weird, but it’s delicious! Sam and I have been making fried rice as a late night snack, dinner, breakfast with an egg on top (of course). And putting bacon in anything makes it next level good.

Fried rice really is the perfect late night snack. To sit in front of the TV late at night with a beer and fried rice is my dream come true. I’ve made a habit of using fried rice as a way to use up any leftover unused veggies in my fridge, and I like to throw some new things in from time to time. Kale is perfect for this recipe, but why not try any other greens you have laying around.

There are a couple of things you need to know before you make fried rice. Number one is, you must use sesame oil to get the taste of fried rice. It’s the thing that really gives it its flavor, so don’t substitute there! You can find sesame oil at any major grocery store in the “ethnic foods” or “Asian foods” section. The other thing is, you must use day old rice. It won’t fry properly and it will give off too much moisture if you use fresh rice.

That being said, let’s get started on this recipe. First you’ll need to add your sesame oil to a hot pan over high heat. Add your kale first, stirring until the kale is wilted and begins to brown. Then transfer the kale to a large bowl, add salt, and add the juice of half a lemon. Give it a stir and set it aside. 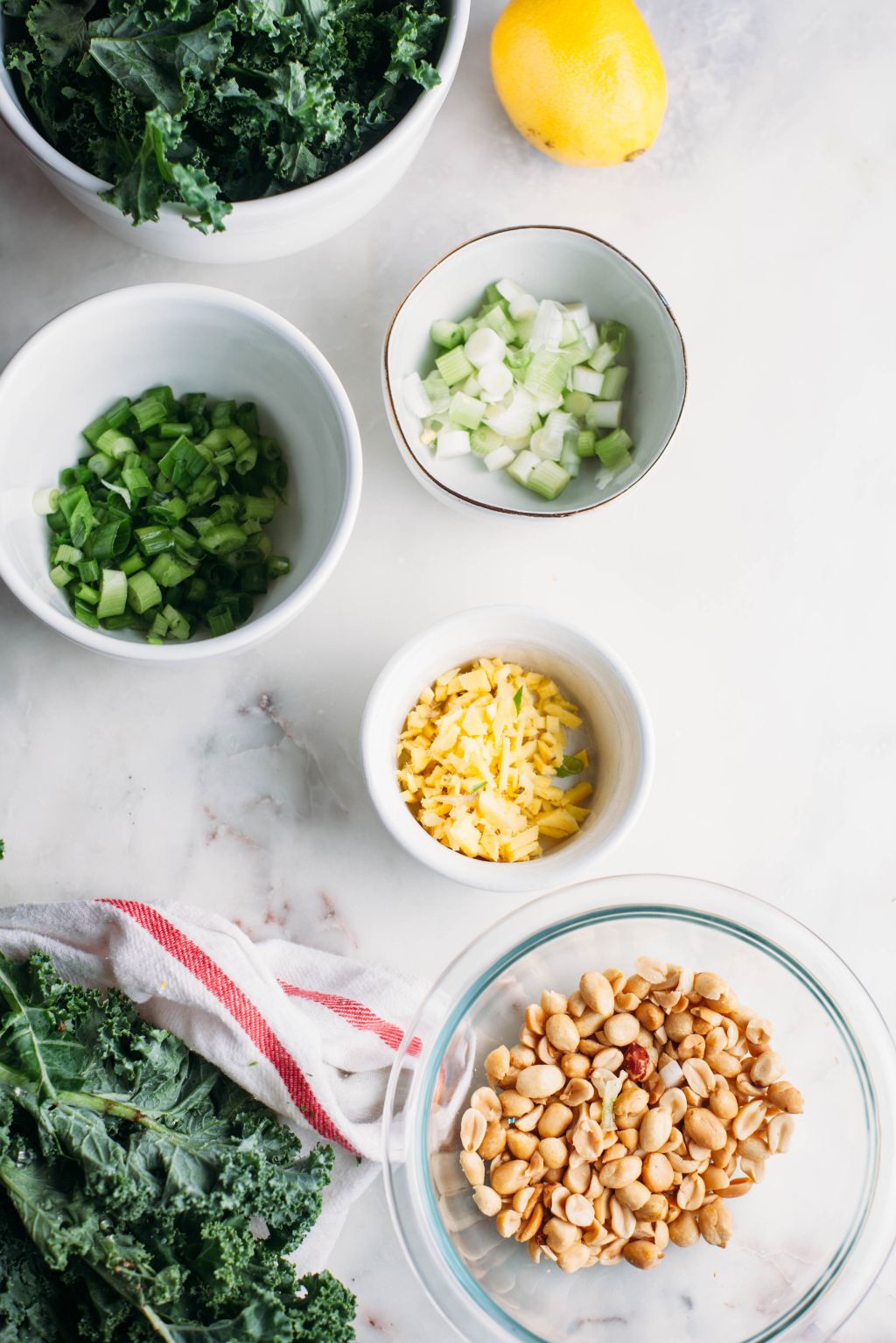 Next, add your bacon to the same pan over high heat. Let the bacon brown. Then add another tablespoon of sesame oil and add the whites of the green onions and the minced ginger. Give it a stir and let that cook for two minutes. To that, add another tablespoon of sesame oil, then add in your rice. Pat the rice down into an even layer, letting the bottom brown for a minute or two before stirring it up. Repeat this again and again until the rice begins to brown. 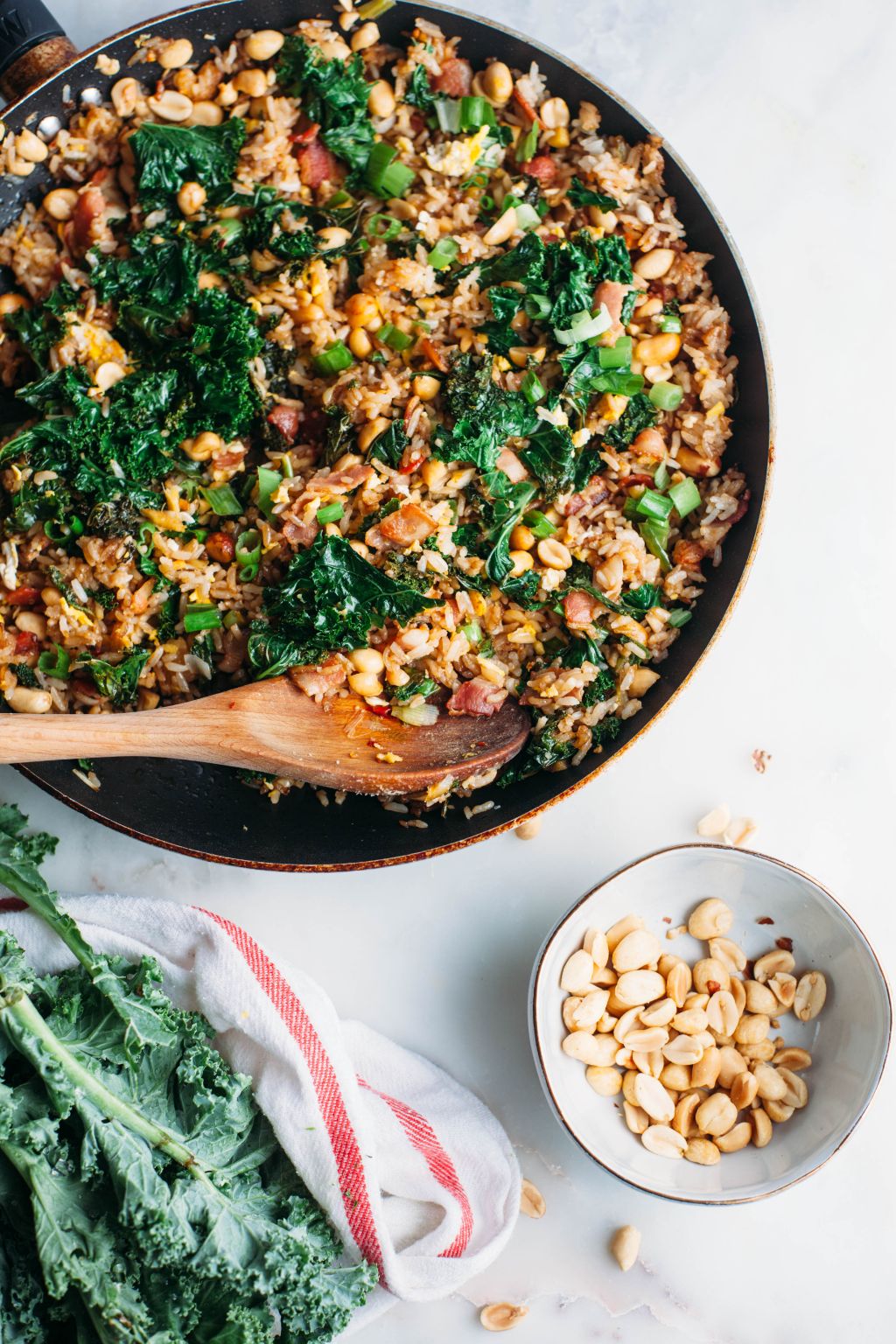 Add your soy sauce and chili paste. Then give it a good mixing before adding in your peanuts. Let the peanuts toast in the rice, stirring. Then once the rice is nice and browned, add the kale back in to the pan. Taste it for seasoning to see if it needs a few pinches of salt. Create a hole for the egg by pushing the rice to the sides, then add a little oil. Crack the egg into the hole and scramble with your wooden spoon. Once the egg is cooked, stir it in and remove the rice from heat. Then top it with green onion tops and serve immediately. See the full recipe below. 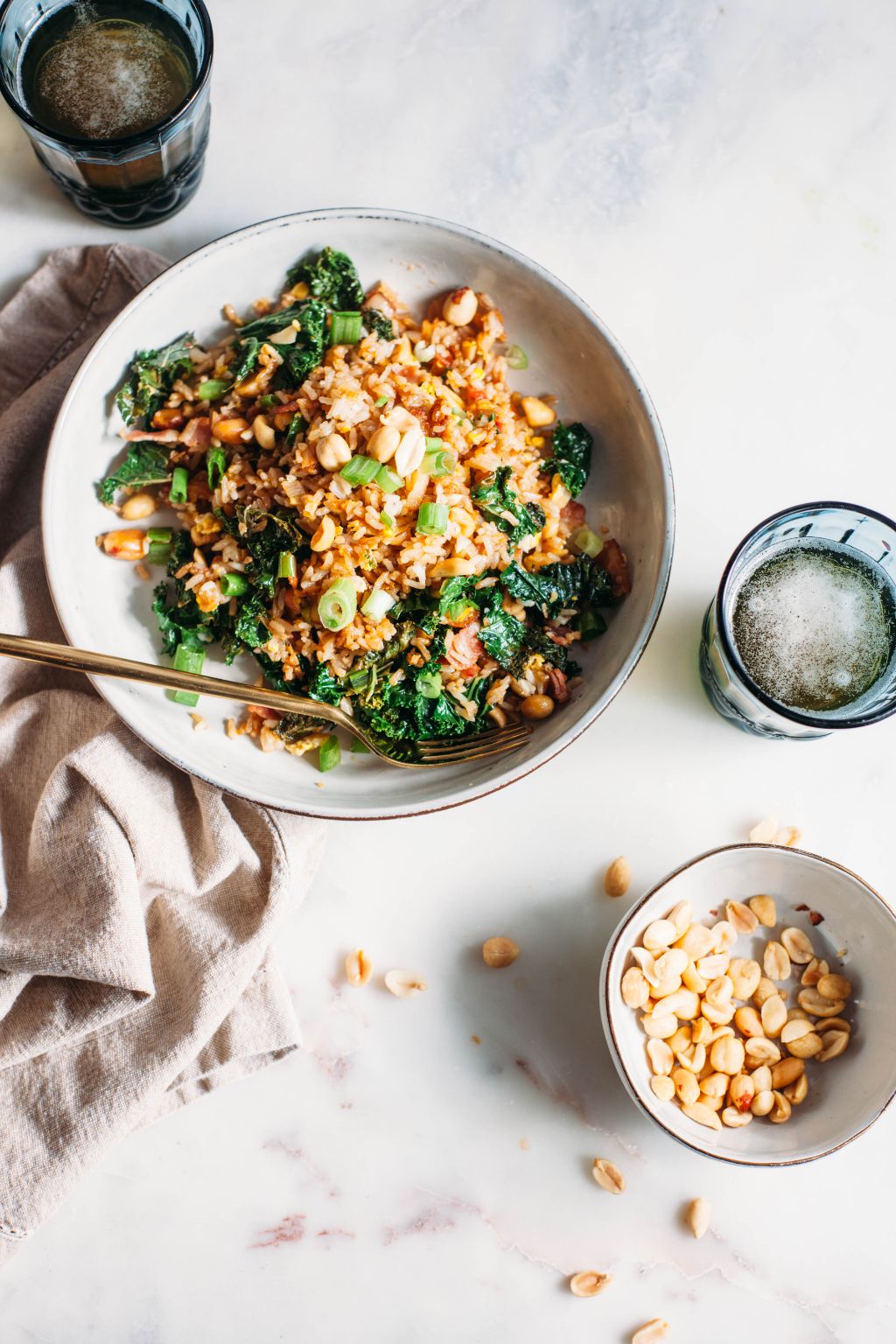 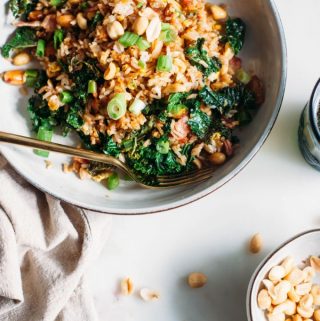