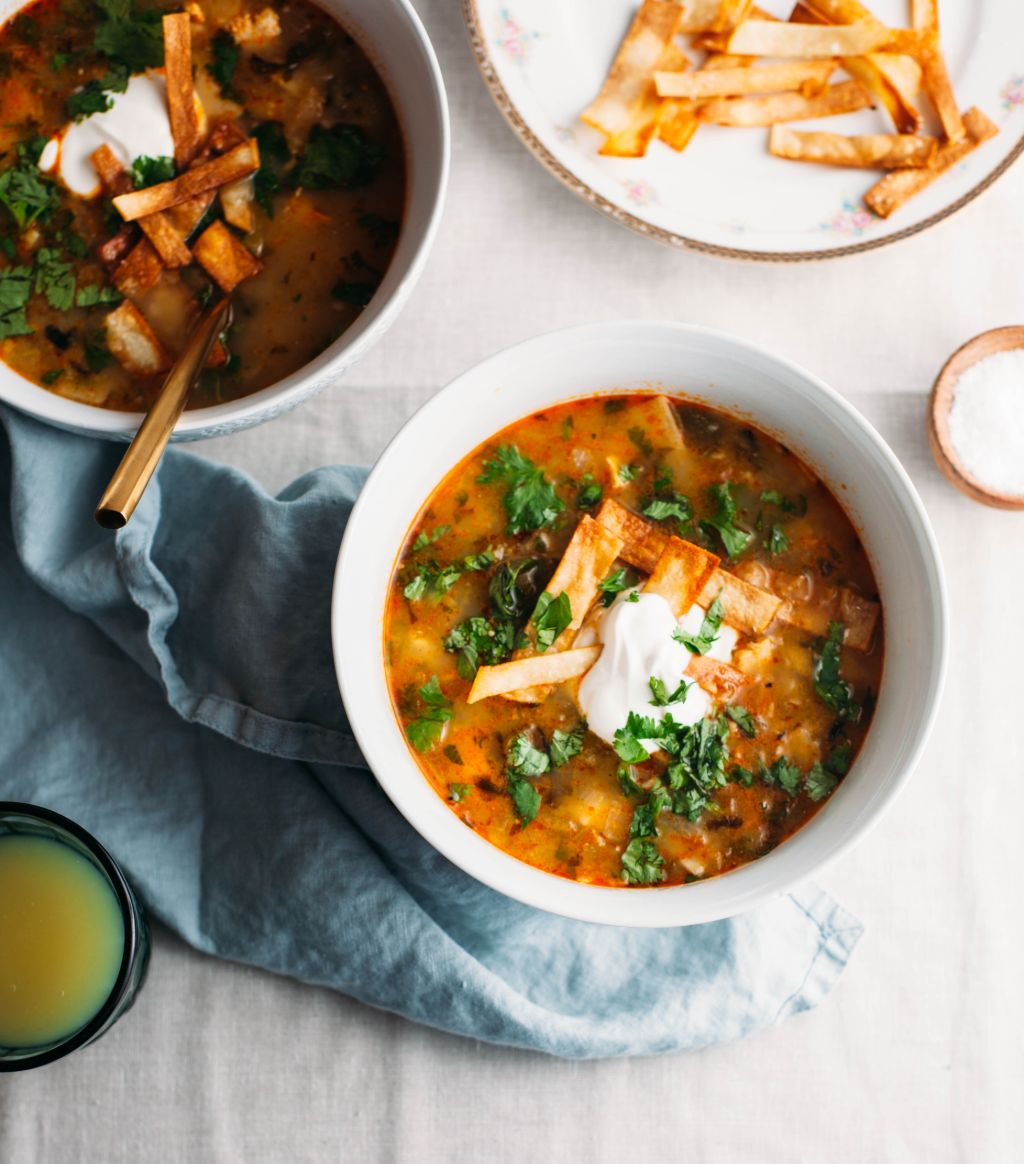 This week has been a snacks for dinner type of week. I definitely did that thing everyone tells you not to do and went to the grocery store hungry late at night. I came back with a bar of dark chocolate with sea salt and almonds, a bag of salt and vinegar chips (the 40% less fat kind because why not), a bag of tortilla chips and guacamole, and a wedge of aged gouda. So my dinner has been all of the above for a few days now. Sometimes, though, when you’re tired and you haven’t cooked in awhile, there’s medicine in just making a big pot of easy to make soup and watching TV while you eat dinner. That’s real self care. So when I felt like a stranger in my own kitchen, I made myself this lovely and easy Tortilla Verde Soup. Or would it be Tortilla Soup Verde? Who knows! But it’s delicious and filled with one of my favorite ingredients–charred tomatillos.

Tomatillos give the soup a slightly tart flavor but still bring that lovely tomato-y acidity that’s familiar in tortilla soup. If you’ve never cooked with them, they’re simpler than they look! Plus you can find them at most grocery stores. Just peel off that outer husk and rinse them under cold water with your hands to remove the stickiness they have. They just look like little green tomatoes. For this recipe we broiled them, which is very low maintenance. Here’s how you make it.

Start by peeling the tomatillos and rinsing them. Put them on a rimmed baking sheet. Place an oven rack 4-6 inches from the top of your oven and turn the broiler on high. Put the tomatillos in the oven and broil for about 10 minutes or until the tops are blackened and the tomatillo flesh has softened. Watch carefully because every broiler is different and it can set off the smoke alarm if you don’t keep an eye on them.

Once they’re done, place the tomatillos in a blender and puree for a few seconds until the texture is like chunky salsa.

Next, dice your onion, slice your jalapeno in half and remove the seeds with a spoon then dice the jalapeno. Separate the cilantro stems and leaves and finely dice the cilantro stems. Chop the leaves. Dice your chicken breasts into one inch cubes. Then dice just six of your tortillas into 1 inch pieces. Reserve the remaining four tortillas for later. We’ll fry these at the end. 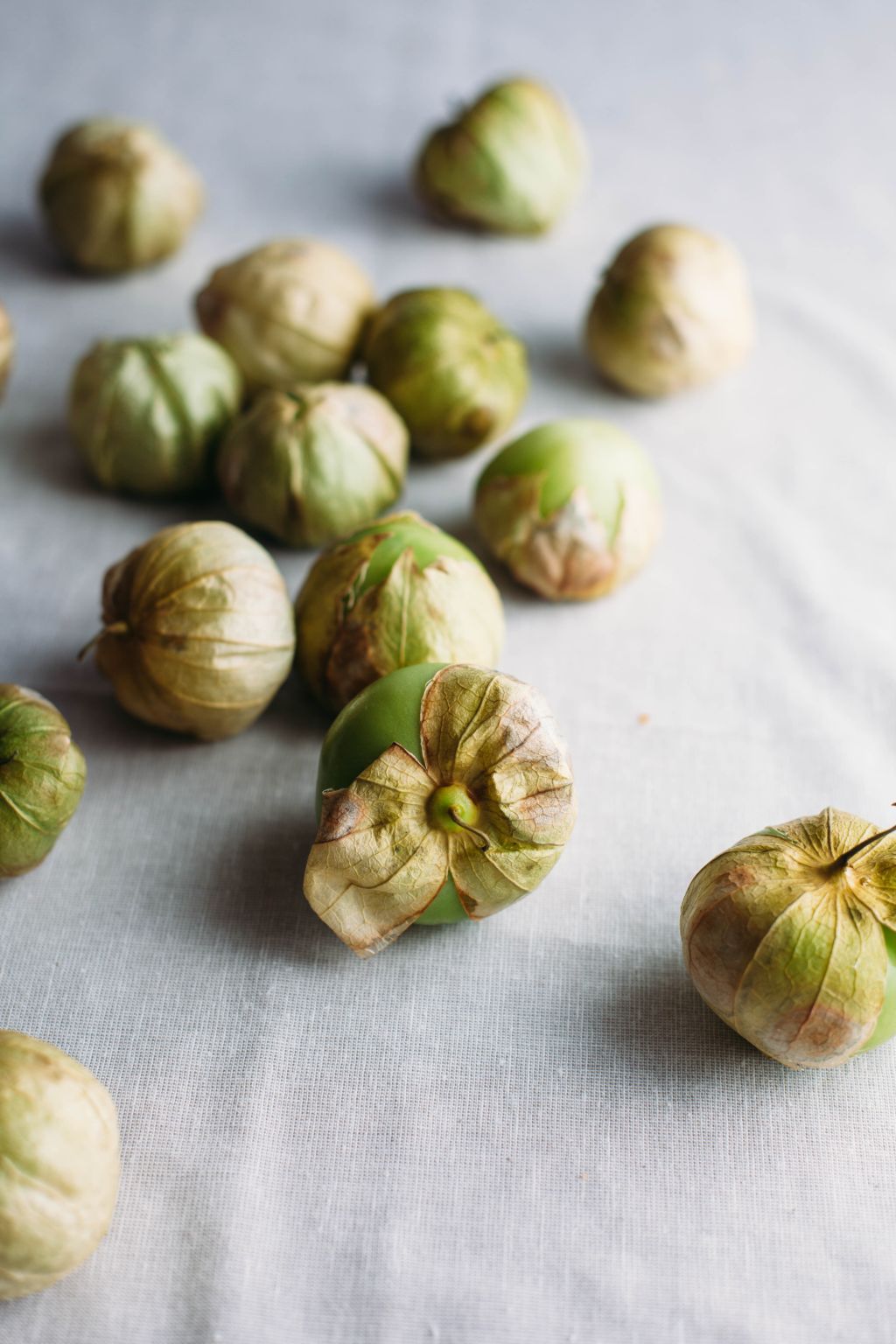 In a large soup pot over medium heat, add two tablespoons of olive oil. Add the onion, cilantro stems, and jalapenos. Cook, stirring often, until the onions are translucent. Then add cumin, paprika, and salt to the mixture, letting the spices open up for just 30 seconds. Add in the chicken, and stir it to coat it in all the spices and onion. Pour in the broth, tomatillos, and the diced tortillas, and bring to a boil. Once boiling, lower the heat to a simmer and simmer on low for 15 minutes, uncovered.

While the soup simmers, cut the remaining tortillas into long thin strips. Place a saucepan on medium high heat, and add enough vegetable oil to cover the bottom of the pan by an inch. To test if the oil is hot, you can wet your finger tips and flick water at the oil. If a drop of water in the oil sizzles, it’s ready to fry. Add the tortillas and fry, turning every few seconds or so until the tortillas are lightly browned. Use tongs to move the tortillas to a paper towel lined plate and sprinkle with salt.

Serve the soup topped with sour cream and tortilla strips. Other lovely toppings could be fresh sliced avocado, lime wedges, or sliced radishes and queso fresco. See the full recipe below. 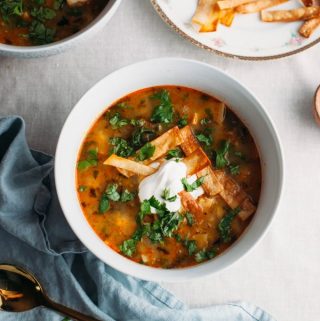