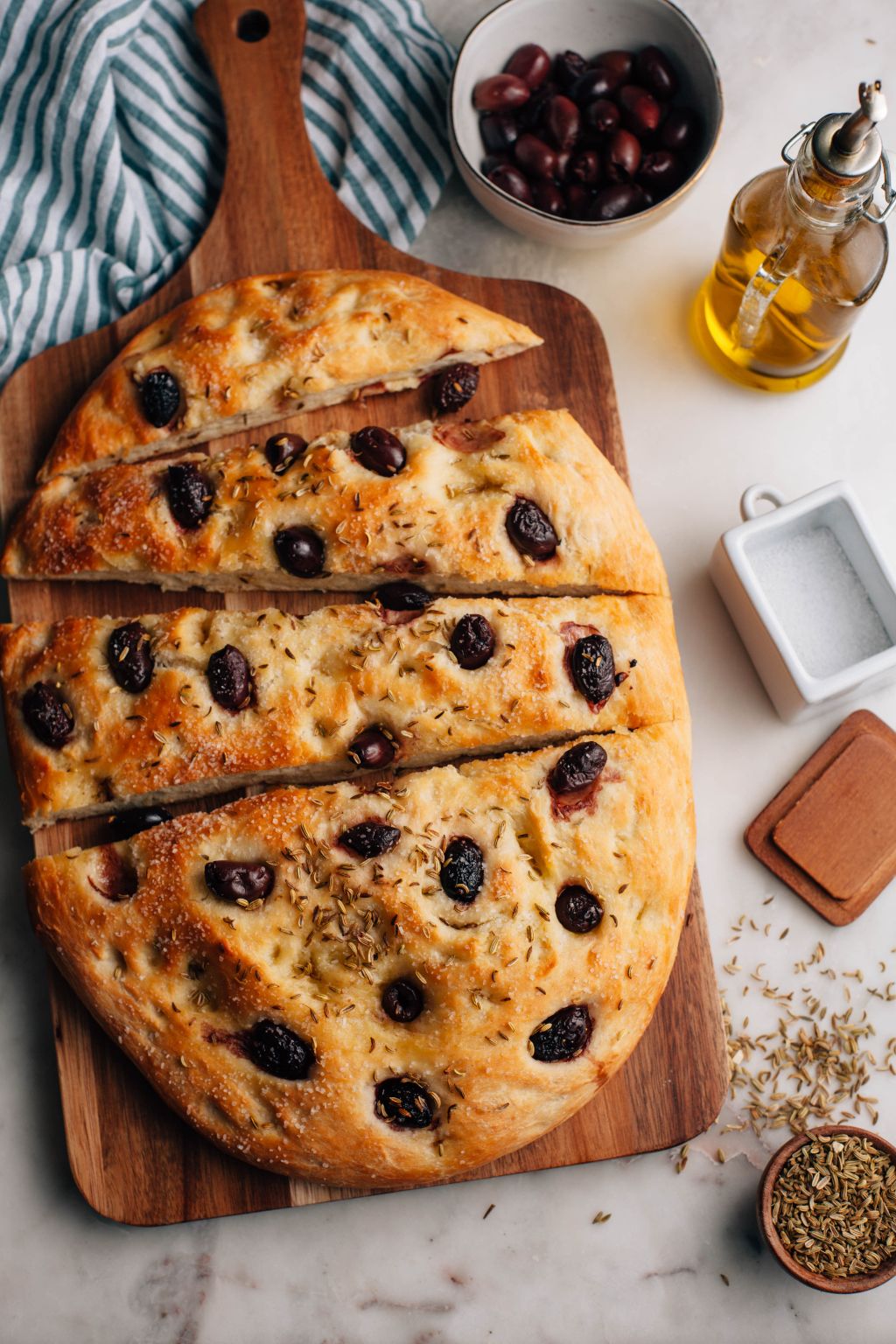 When I first started baking, I stayed away from making bread, thinking that you have to have some sort of super power to be able to bake bread. I thought that life was too hectic to spend a whole day baking. Eventually, I dipped my toe in the water, and I ended up with a full on sourdough obsession. It turns out, I was only half right. Sourdough is a LOT of work. Focaccia on the other hand is delightfully low maintenance, and it takes less than two hours from start to finish. Now that’s some bread I can get behind.

END_OF_DOCUMENT_TOKEN_TO_BE_REPLACED If you know me, you know how much I love pizza. And basically everything else that’s very bad for you. So putting a salad atop my pizza makes me feel healthy even if it is only covering up a giant piece of bread with cheese. I had a housewarming party not too long ago, and I made the focaccia recipe from Cup of Jo’s post, featuring Katie Quinn Davies. It was a huge hit! A friend of mine suggested making it into a pizza dough. As someone who is constantly trying to turn things into pizza, I was like, Why didn’t I think of that?

It turned out great! The crust is fluffy and thick (still very focaccia-y). And the pancetta gets crispy like bacon. Using fresh mozzarella is absolutely worth it. It melts and bubbles perfectly unlike the shredded kind. And the dressed arugula has a tangy herby twist. I actually use that vinaigrette on everything. We eat arugula salads constantly, but that mustard vinaigrette could go great on any greens or as a chicken marinade.

I digress. This is my interpretation of Focaccia turned pizza turned salad. makes 2 round or 1 large pan pizzas

2 1/2 tbsp olive oil, plus more for greasing the pan

3 cups of bread flour, plus some for dusting

4 ounces prosciutto (or other cured meat)

salt and pepper to taste

In a small bowl, mix together 11 ounces of warm water, yeast, 2 1/2 tbsp olive oil and sugar. Let sit for five minutes, until frothy. Sift flour into a large mixing bowl. Make a well in the center and pour in the yeast mixture, mixing together with a fork. It will appear crumbly but moist. Form into a ball and knead on a floured surface for ten minutes until elastic and smooth. Form into a ball and place in a large greased bowl. Cover with a damp towel and let sit for one hour in a warm place until doubled in size.

Meanwhile, put sliced onions in a pan over medium heat. Cook, pushing around frequently until darkened and translucent, about 7-10 minutes. Add the brown sugar and balsamic and cook for ten more minutes. Set aside

Once dough is doubled, punch it down in the bowl and then remove to a floured surface. Knead 1-2 minutes, adding in the fennel and a pinch of sea salt into the dough as you knead. Halve the dough if you are using a cast iron skillet, or if you choose, use a large baking sheet for one big pizza.

Preheat the oven to 425 degrees F. Grease two cast iron skillets (or one baking sheet) and flatten and shape the dough to fit the bottom of the pan. Sprinkle with additional sea salt and fennel. Cover with a damp towel and let rest for 20 more minutes. Add a few spoonfuls of marinara and spread to coat the dough evenly. Place the mozzarella on top. Spread onions evenly then add the prosciutto. Bake for 20 minutes until cheese is a little browned an bubbly. Let cool for a couple minutes.

Meanwhile, mix together the olive oil, mustard, and red wine vinegar. Season with salt and pepper. Toss the arugula with the vinaigrette in a large bowl until evenly coated. Add to the top of the pizza before cutting and serving.