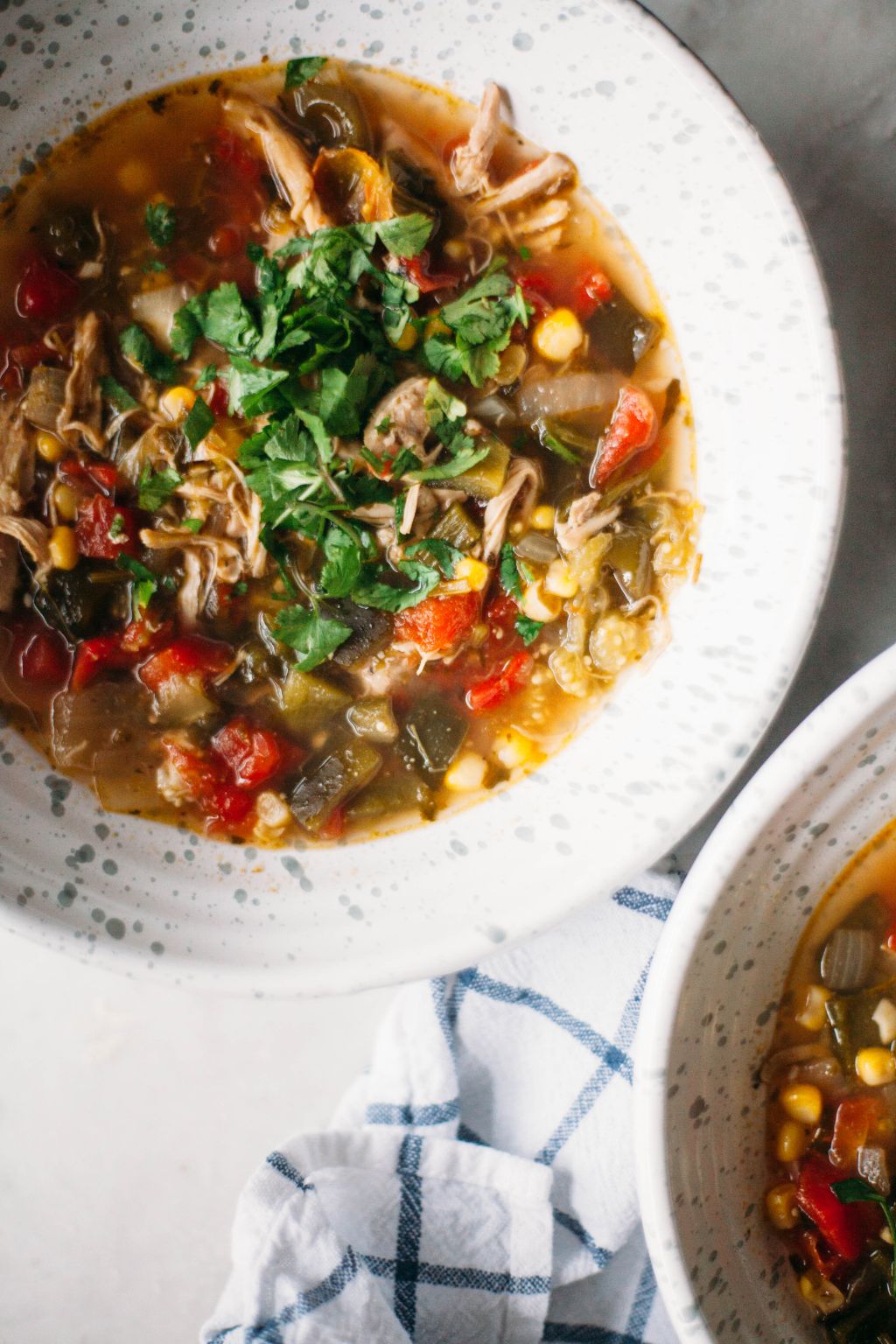 There’s not a writers block that can’t be cured by a brisk walk in the snow. Being cooped up inside all weekend, I decided to layer up in whatever clothes I had and venture outside. I put on my mom’s old black leather snow boots from the 80s, complete with a black fur rim, and I trudged outside to clear my mind. It brought back memories of childhood snow days with ruddy faces and hot chocolate. If I didn’t have gloves, I’d put socks on my hands and go outside and return indoors to hot bowls of tomato soup and grilled cheese.

I made this tomatillo soup on one of those freezing days. I roasted tomatillos and peppers under the broiler and let them wither away in a stew until it all becomes a rich brothy soup with pulled chicken and cilantro and corn. It’s perfect for a freezing day, and you can even make it in your instant pot if you have one! Here’s how you make it.

I like to poach the chicken thighs first. You get a small pot filled with water and bring to a boil. Once boiling, add the thighs and let the water come back up to a boil. Turn it down to a simmer and let them simmer for ten minutes. Remove from heat, cover with the lid, then let them sit for 25 minutes. Remove them from the pot and shred with two forks.

Start by peeling your tomatillos and rinsing off the sticky layer in cold water. Then broil them on a sheet pan on the very top rack of the oven with the peppers until they’re blackened. Turn everything over and blacken the other side. 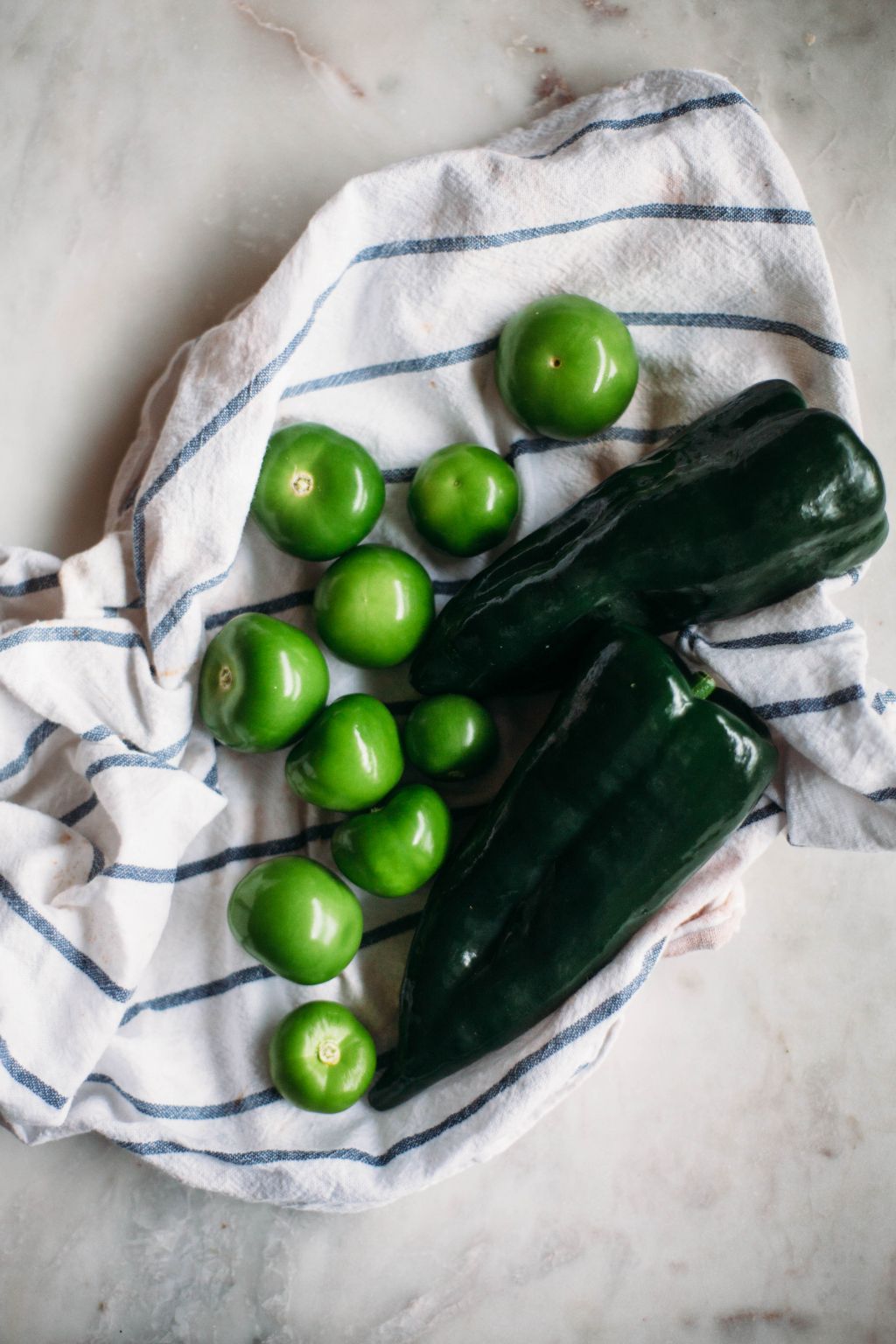 Then cut the peppers, removing the seeds with a spoon and dice. Cut the tomatillos in quarters or sixths depending on how big they are. 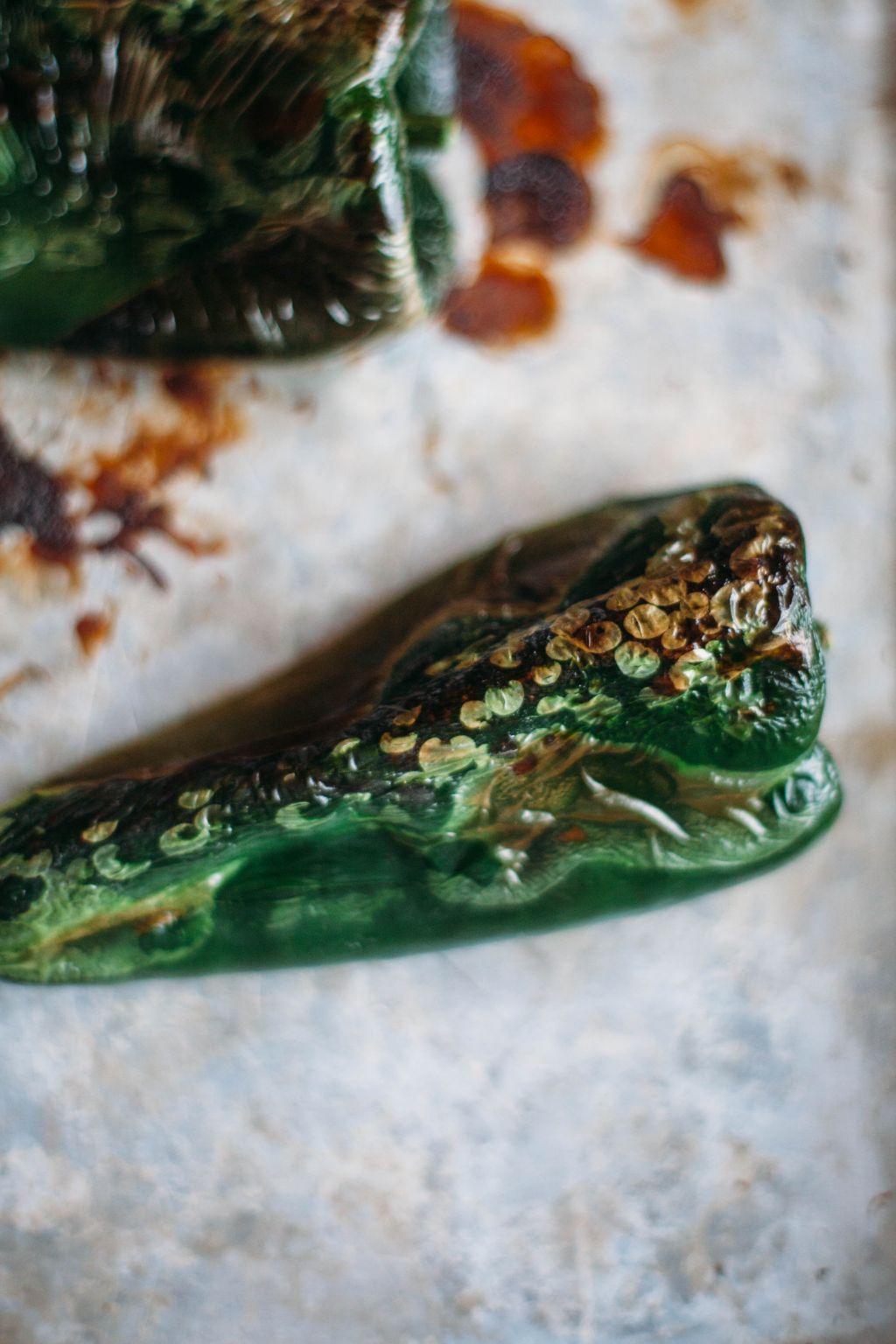 In a large soup pot, add a diced onion and diced cilantro stems and minced garlic. Saute until the onions are translucent. Add your cumin and oregano and salt. Saute for another minute. Add your peppers, tomatillos, frozen corn, broth, chiles and tomatoes, and pulled chicken. Bring to a boil and then simmer for 30 minutes. The tomatillos will break up and incorporate into the broth. 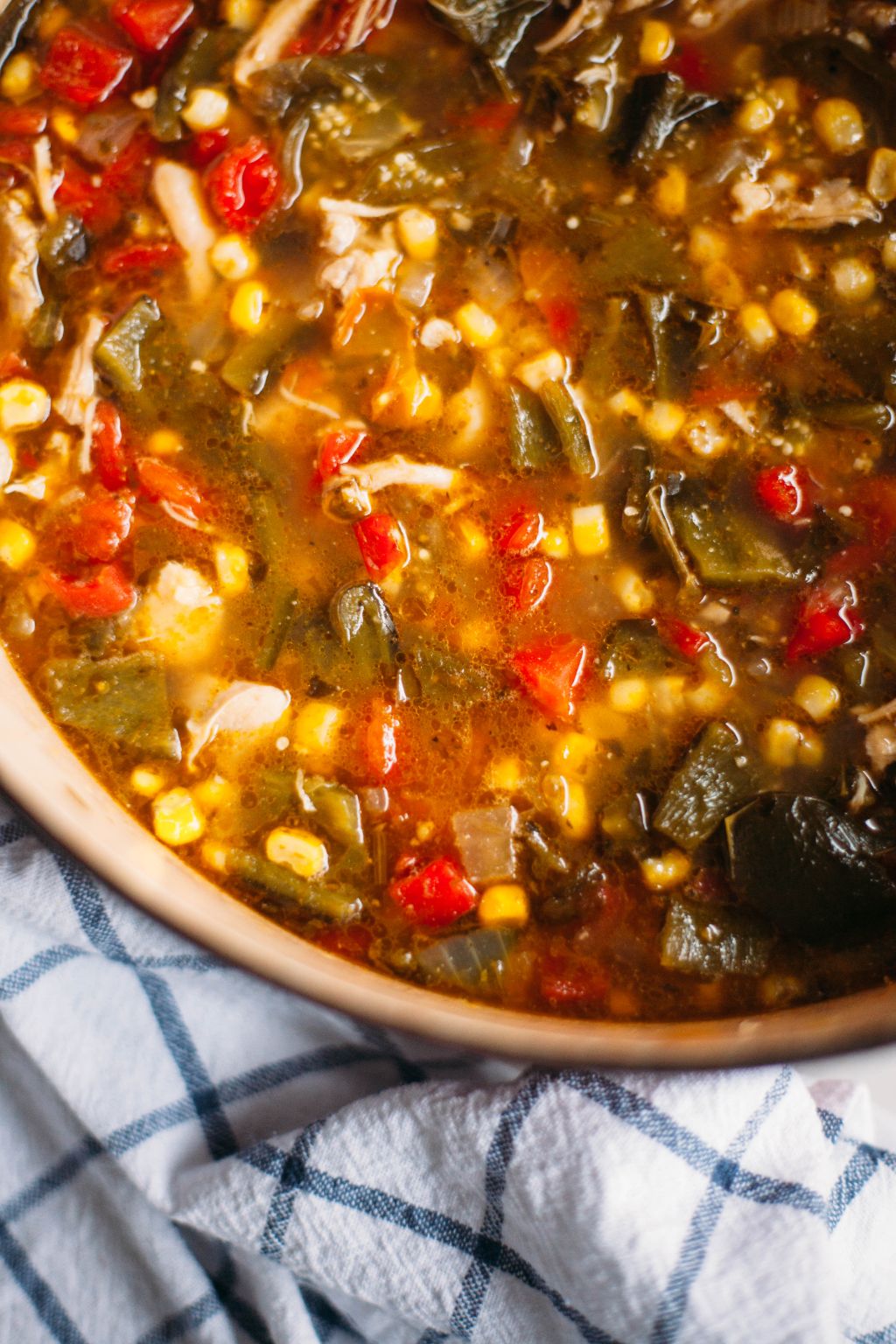 Top with cilantro and sour cream, if desired.

If you are using an instant pot, don’t boil your chicken first. Broil your tomatillos and peppers and chop them as instructed. Put the pot on the saute function. Saute your onions, cilantro stems, and garlic. Add the spices and let them open up for one minute. Add the remaining ingredients including the chicken thighs, whole. Turn off the saute function. Put on the lid, turn to sealing, click the pressure cook button and set the pressure cook timer to 15 minutes. Let it release naturally. Remove the thighs and shred then put them back into the soup. Add the cilantro leaves at the end.

You can also use pork for this recipe in an instant pot, but I have not done this on the stove top. It also takes much longer to cook. Slash a pork loin with a knife about a quarter inch deep in criss cross lines across it on both sides. Rub the pork loin with some extra salt and cumin. Then put it in the instant pot with the rest of the ingredients after the vegetables have sauteed. You may also need an additional quart of broth if the pork loin is large. Or you can use half of a pork loin. Usually two pounds of meat will work with 1 qt of broth. Then pressure cook for 55 minutes. Shred it with two forks into the soup after the pressure has released naturally. 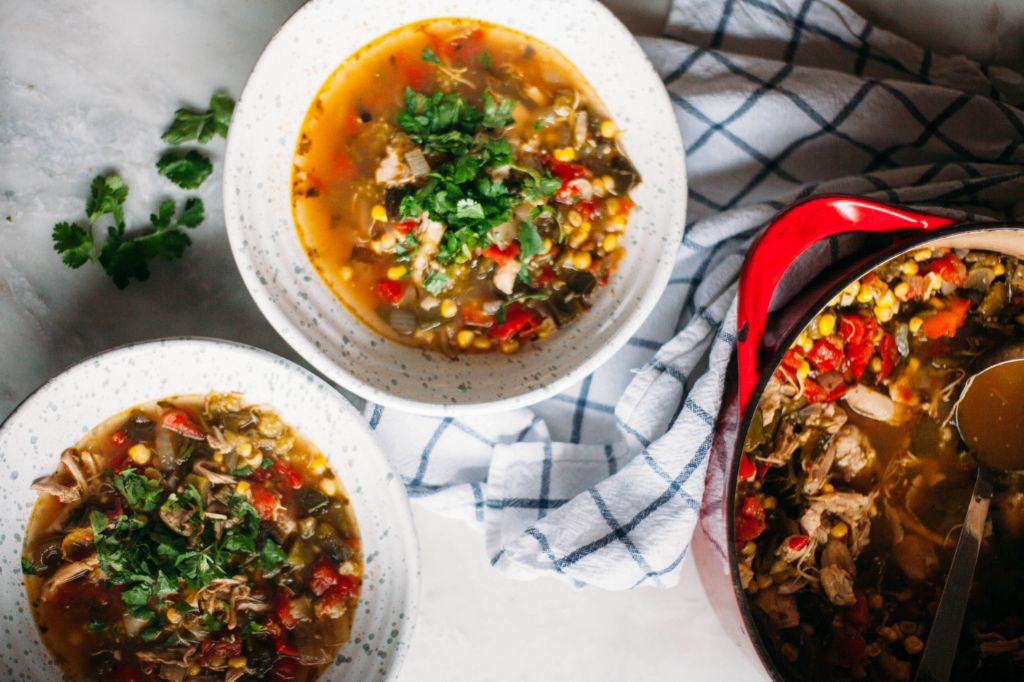